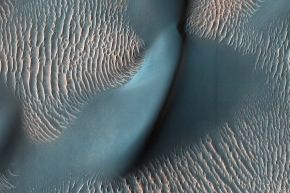 As NASA announces it is recruiting new astronauts in preparation for journeys to Mars, groundbreaking research from Ulster University could help shape their future landings.

The pioneering Ulster University study provides new insights into how sand dune and wind behaviour on Mars can assist with landings and future manned missions to the red planet.

In a global first, Ulster University used fine scale 3D computer modeling to unravel complex airflow patterns on the planet. The results firmly identify the direction of winds passing over sand dunes on Mars that until now have been misinterpreted.

The two-year study covered 11 sites on three of the largest sand dunes in the Proctor Crater region of Mars. The work revealed that winds travelling from the east-southeast are the dominant sand transporting winds, whereas winds from east-northeast and west-southwest directions appear to play a more subordinate role.

The results also show sharply peaked dune crests on Mars help to steer winds while rounded dunes are less likely to induce this behaviour. Furthermore, airflow accelerates by up to 150%- 200% at crest positions, displaying a similar behaviour to dune sites on Earth.

Ulster University's Professor Derek Jackson explained: "This is an important discovery that unravels the complex picture of sand movement across Mars.  "By using ripples as modern wind vanes we can now predict future locations where sand presents hazardous obstacles for future manned missions and landings.

"For the very first time we used a 3D computer model of wind at a fine scale of 5m to provide a much more accurate insight into wind flow directions occurring on Mars today, than previously possible.

"At this particular site on Mars we have identified the direction of those winds that are likely responsible for transporting sand across the dune surfaces. These results have important implications on how we interpret past and present landform evolution on Mars.

"Wind modeling at this microscale now provides us with an effective new tool to accompany surface ripple displacement information to help understand dune dynamics on Mars for future manned missions."