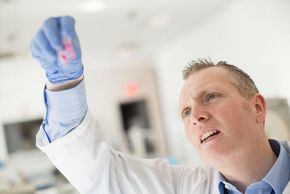 World-leading scientists at Ulster University have discovered that a diabetes medication could also reverse the effects of cognitive decline commonly associated with diabetes and neurodegenerative disorders such as Alzheimer's disease.

Sitagliptin is an oral medication used to treat Type 2 Diabetes. An Ulster University study showed that a daily dose of the drug over 21 days significantly reversed memory impairment as well as improving metabolic control in mice.

The University is now calling for clinical trials to be performed in people to see if the drug offers the potential to open up a treatment for neurodegenerative disorders including Alzheimer's disease.

Ulster University's Professor Victor Gault explained: "Previous studies at Ulster University have shown that mice which eat a diet rich in fat or those that became diabetic over a period of time exhibit reduced recognition memory.

"Our studies now show that when these mice are treated orally with Sitagliptin that this drug reverses their cognitive decline as well as their diabetes.

"We believe that the drug exerts its effects by increasing the levels of naturally-occurring gut hormones, which can activate areas of the brain linked to regulating learning and memory processes.

"Our studies demonstrate that the drug enhances the levels of key genes in the hippocampus region of the brain that are important for learning and memory, behaviour and insulin signaling processes.

"Ulster University believes these new findings offer enormous potential for drug repurposing and that an already licensed drug could be tested safely in humans to ascertain if the drug also offers beneficial neuroprotective effects in Diabetes and Alzheimer's disease."