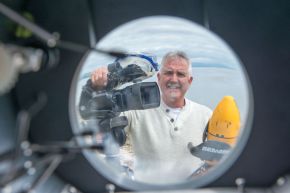 Embarking on a media studies and production degree at Ulster University has been a life-changing experience for mature student Kieran McCormick.

The 53-year old father of six decided he would have to 'adapt to survive' after his plumbing business went into decline during the economic downturn.

Combining his passion for diving and underwater videography, Kieran set out to gain the necessary skills and qualifications to make nature-based documentaries and now runs a successful production company.

Kieran said: "For the first time in my life I am doing something that I love. I had been an amateur underwater videographer for many years but had no formal training, having left school and gone straight into a heating and plumbing apprenticeship.

"When the recession impacted on the plumbing and heating business that I had built up over 20 years I decided to go back to college and follow my passion.

"After completing my A levels and a HND, I transferred into the final year of the media studies and production degree at Ulster University, which I completed part-time over two years, and I have never looked back."

Kieran is now in the process of setting up Sleepy Hollow Productions, a Donegal-based media company specialising in wildlife documentaries and short films.

"This degree has really helped turn my life around. I am now running my own successful company and the skills and knowledge that I have acquired will allow me to grow the business and expand even further.

"It is an exciting time to be working in the creative industries, which is one of the fastest growing and increasingly important sectors of the economy. I hope to maximise on this potential and take advantage of the opportunities that exist in both the local and global marketplace.

"I am currently working on a number of projects in the north Atlantic combining my love of nature with my passion for media. This has truly been a life-changing experience and rewarding career choice."