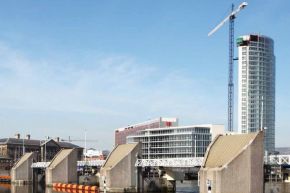 Northern Ireland's commercial property market continued to recover in 2014 reflecting a boost in investor confidence, according to independent research published by Ulster University.

The Ulster University report, developed in partnership with MSCI, a global provider of property investment research, reveals that commercial property in Northern Ireland posted a total return of 10.9 per cent in 2014. This represented a continued improvement in market performance, building on the 7 per cent total return achieved in 2013.

The research more specifically indicates that the commercial property market in Belfast returned 10.6 per cent in 2014, above the European average of 9.4 per cent and outperforming many major cities including Amsterdam, Copenhagen, Lisbon and Stockholm.

"Importantly, the indicators measured within the report including income return and rental value, constitute essential performance benchmarks for institutional investors. As such, the research provides a robust and credible evidence base to inform investment decision-making.

"Northern Ireland remains a highly attractive proposition for commercial property investors due to high income returns combined with discounted pricing relative to many other UK regions. This, along with the expectation of strengthening economy, has tempted many institutional investors into the market as reflected in the marked increase in transactions through 2013 and 2014."