Dr Victoria McCollum is making a name for herself with American television company HBO and working on some of the world’s biggest television shows. 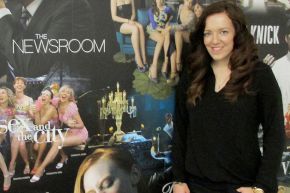 Dr Victoria McCollum is making a name for herself with American television company HBO and working on some of the world’s biggest television shows.

An Ulster University student graduating today is making a name for herself working with world renowned American television company HBO.

Victoria McCollum from Coleraine will receive her PhD in Film Studies in Coleraine and will do so filled with happy memories because on the day of her PhD examination she was offered a job at HBO's headquarters in New York.

Initially working as a Consumer/Fan Research analyst, Victoria now has responsibility for monitoring and analysing crucial revenue figures and for communication between HBO's affiliates in its London, Nordic and Los Angeles based offices.

Victoria believes that her Ulster University education gave her the confidence and belief to succeed in what is a globally renowned company.

She has worked on some of the biggest television shows in the world and the most talked about sporting event of the year.

"The daily grind has consisted of such tasks as recommending new merchandise for 'True Detective'; attending pre-broadcast screenings of 'Girls'; discussing production logistics for the Mayweather – Pacquiao fight; marketing and promoting licensed products for 'True Blood'; and sampling everything from Arya Stark's sword to the new Game of Thrones three-eyed Raven Ale."

"One of my favourite aspects of the job is working for a network that is constantly rewriting the rules of television via its distinctive brand of original programming."

She says: "Ulster University's BA in Media Arts would ultimately enhance my artistic abilities while introducing me to the business and professional aspects of the industry.

"The personal benefits that I gained from my education at Ulster University are manifold. Firstly I desired to belong to a university that deeply wanted me to belong.

"Ulster University delivered by providing me with a welcoming space to meet others from many different walks of life and to pursue and develop new interests with much support and encouragement.

"My education brought me kicking and screaming out of my shell and into the light, fuelling my intellectual curiosity while leading me to generally live a happier, healthier and more public spirited life."

While loving her exciting role at HBO, Victoria, who co-created a short film called Fumbling Towards Ecstasy screened at over 15 international film festivals, would like to return home to Northern Ireland in years to come to "add real value to the future of the film, television and digital content industry in Northern Ireland."

Victoria added: "I am really excited to be part of a growth sector for the economy and I feel like I'm really playing my part in that."