Séanín Smith from Belleeks suffers from an extremely rare genetic condition, but has shown incredible determination and strength of character to graduate with a degree in Human Nutrition. 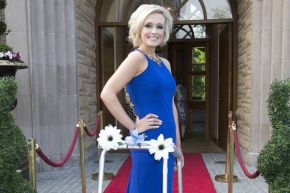 Séanín Smith from Belleeks suffers from an extremely rare genetic condition, but has shown incredible determination and strength of character to graduate with a degree in Human Nutrition.

A young County Armagh woman battling a debilitating illness has won the Ulster University undergraduate of the year award.

Séanín Smith from Belleeks suffers from an extremely rare genetic condition, but has shown incredible determination and strength of character to graduate from Ulster University with a degree in Human Nutrition.

Séanín credits Ulster University and the staff in the Northern Ireland Centre for Food and Health with teaching her how to work independently and helping her to prepare for future employment, while in turn the Ulster University has acknowledged the 22-year-old's sterling efforts with one of the most prestigious prizes it can offer.

She has been accepted to continue her studies and complete a Masters in Human Nutrition and Dietetics at Ulster University, describing that as 'a dream come true'.

The intelligent young woman is currently being tested for a condition that affects the elastin in the body called Pseudo xanthoma Elasticum (PXE). She has also been diagnosed with Ehlers Danlos Syndrome (EDS), a genetic connective tissue disorder that affects the collagen in the body.

Given the complex nature of her conditions and with her health deteriorating rapidly her family have had to search for medical expertise and treatment abroad.

To help with the high costs the local community formed 'The Fight on Campaign for Séanín to raise funds and awareness, something Seanin feels strongly about.

In her final year studying for the degree course at Ulster University Séanín worked around numerous hospital appointments with her parents Louie and Mary there every step of the way for their inspirational daughter. Mum Mary drove Séanín, a former Belle of South Armagh, lifeguard and amateur actress, two and a half hours each study day so she could continue her studies.

Séanín says she is overwhelmed to receive the prestigious Ulster University undergraduate of the year award.

"When I found out I was receiving the Ulster University undergraduate of the year award, I was completely overwhelmed. I will receive the award on the same day I graduate," said the modest Séanín, who constantly smiles through her illness.

She continued: "Ulster University has prepared me for life after I graduate.  It taught me how to work independently and has helped me prepare for future employment. You have to be so independent when you study at University.

"It's not like when you are at secondary school when you rely on your teachers to feed you the information. You have to do your own independent work and research constantly."

On her condition, Séanín said: "I found out I was having difficulties with my health in my adolescent years when I was about fourteen.

"My own health and experience as a patient helped inspire me to work in food and health and to help others.

"I did a lot of voluntary work and tutoring in schools to help build up my work experience. My work at Daisy Hill Hospital and the Reach programme for example confirmed I really wanted to be a dietician.

"My A-level Home Economics inspired my love to work in food and health. I wanted to be a dietician and I had the grades but I hadn't studied all the sciences so my teachers told me I couldn't apply for that course.

"So I decided to go to Ulster University to study Food Nutrition but in my second year I transferred to Human Nutrition which I hoped would increase my chances of studying dietetics later on. It took me five years to do my course as my final year was split over two years due to my health but those five years of study were brilliant . I graduate this summer with BSc Hons Human Nutrition 2.1 with a Diploma in Industrial Studies with commendation.

"My third academic year was a dietetics placement year based at Daisy Hill Hospital but covering the whole Southern Trust area. Unfortunately that's when I took really ill. I took a stroke 3 months in and was off for 6 months sick but completed the final 3 months of my placement. My tutor was so supportive and I worked incredibly hard across those 6 months. In the end I got a first at my placement year so I was very happy about that.

"I benefitted from a lot of different work on my placement year. From community work to nursing homes and to shadowing dieticians and out on community calls to patients homes. I also worked on the renal ward figuring out audits and preparing different recommendations to improve their menus. I really enjoyed the human contact part of my placement and it confirmed even more that I wanted to be a dietician.

"I really can't thank Ulster University enough for the support I received when I took ill. Without their support it wouldn't have been possible to complete my degree."

Despite her health issues, Séanín is focused on continuing her education and is delighted to have the chance to complete a Masters degree at Ulster University.

"The really great news is I have now been accepted to study a Masters in Dietetics at Ulster University – my dream has come true.

"So I'm back to Ulster University in September. It's a two year Masters course with one year academic studies and another year's placement but because of my health I am able to spread it all out over three years so I can balance hospital appointments etc."