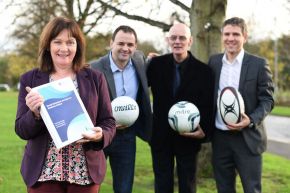 Almost 90 per cent of people in Northern Ireland believe that sport is a good way to break down barriers between Protestants and Catholics.

This was just one of the key findings announced by Ulster University, at the launch of Northern Ireland's first ever report into public perceptions on the key issues relating to sport and social exclusion in Northern Ireland.

The research also found that 67 per cent of people in Northern Ireland believe that sports-based peace-building projects are effective, and this figure increases to 91 per cent for those who have actually taken part in such a project.

Ulster University's research, which was commissioned by the Office of the First and deputy First Minister, examined the extent, distribution and causes of social exclusion in Northern Ireland sport. Conducted across Northern Ireland, the research included 104 in-depth interviews, and a survey of 1210 people carried out as part of the Northern Ireland Life and Times Survey.

The landmark research reveals that progress has been made by the main sporting organisations in becoming perceived as more inclusive, but much work is still to be done.

The key findings include that 84 per cent of people believe sports in Northern Ireland to be more open and inclusive than ten years ago, although over half (52 per cent) of people do no sport or physical activity at all.

Participation and interest in soccer, Gaelic games and rugby continues to reflect the community divide but the majority of people (57 per cent) believe there is nothing wrong with different sports or teams being for Protestants or Catholics and over half (51 per cent) agree that segregated schools are a major cause of segregation in sport.

Furthermore, more people agree that national anthems should remain part of sport in Northern Ireland (42 per cent) than believe they should be removed (36 per cent)

Ulster University's Professor Owen Hargie said: "For the first time ever Northern Ireland now has a benchmark for both government and local sporting organisations to chart the evolution of local attitudes to the future of sport. Our findings will assist them in better understanding public perceptions and attitudes to cohesion, sharing and integration in Northern Irish society.

"The results of our research also highlight how sport presents both challenges and opportunities in Northern Ireland's ongoing path away from the violence and division of the Troubles. This is the beginning of a much wider debate and we look forward to seeing our recommendations shape the future generation of sport."

Speaking at the launch Junior Minister, Jennifer McCann said: "I welcome this study which reinforces sport has the power to transcend all differences and unite our community. This report examines the extent, distribution and cause of social exclusion in sport here and provides a useful insight into attitudes and public perceptions.

"Within the report, 84 per cent of people believe sport here is more open and inclusive than ten years ago, however, 52 per cent of people do not engage in sport or physical activity at all. The findings identifies many females, less well-off people, older people, people with disabilities, ethnic minorities, lesbian, gay and bi-sexual people and transgender people continue to face barriers to participation in sport and physical activity.

"I commend Ulster University, Professor Hargie, Dr. Somerville and Dr. Mitchell for producing this comprehensive piece of research. Access and participation are key issues which OFMDFM are committed to addressing, as no one should feel excluded or isolated.

"We must all now be proactive and use this study as part of a wider conversation and programme of work to make sport welcoming, inclusive and rewarding for all."