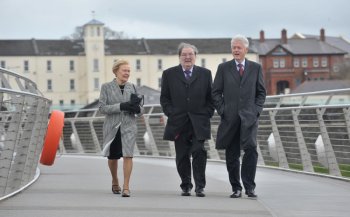 Moment in history: former US President Bill Clinton and John and Pat Hume walk the Peace Bridge in Derry as part of the President's visit to the city hosted by the University of Ulster.

On his fifth visit to the city, the President officially launched a new book celebrating the Tip O'Neill peace lectures given at the university and addressed a public audience in Guildhall Square to honour Nobel Peace prize-winner John Hume's contribution to peace in Northern Ireland.