Volunteering Is Good For Your Health! 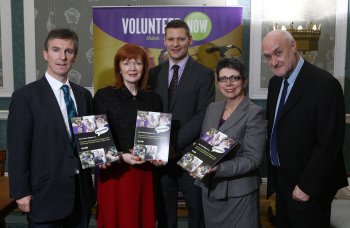 A three-year University of Ulster research study into the activities of older (50+) people who volunteer for charity work has found that volunteering has positive impacts on both mental and physical health.

The study followed 344 volunteers located within 109 organisations across Northern Ireland over a three-year period. It provides an up-to-date picture of the volunteering and health patterns among the 50+ age group and determines how their volunteering experiences relate to their self-reported health and quality of life.

The study also looked at recruitment, motivations for volunteering and satisfaction with volunteering. To support and complement the quantitative study, Dr Anne Tracey facilitated three focus groups and seven one-to-one interviews with volunteers.

The results of the study suggest that for older people the maintenance of health and the prevention of decline associated with retirement and ageing is highly valued. Over the three-year period, participants displayed modest improvements in physical health and stability in their mental health scores.

Volunteers were involved in a wide variety of activities, the most popular being organising or running events (38%); giving advice (31%); befriending or mentoring (30%); and raising money or handling money (29%). The reasons given for volunteering suggest that older volunteers have time to devote to volunteering, skills to offer and the motivation to become involved in activities which benefit their communities.

An important finding was that volunteers, while being motivated to ‘improve things’, reported their role as being self-enhancing and satisfying as they were able to use their skills to help others and to learn new skills. Volunteers felt that organisational support practices were very beneficial in ensuring they were suitably placed and reported that their volunteering activities were appreciated by their organisations.

The study was launched at Stormont by Junior Ministers Jonathan Bell MLA and Jennifer McCann MLA.

Professor Stringer, Director of the Psychology Research Institute, said: “The partnership approach with the Volunteer Now team contributed strongly to the success of this large scale study.

“The findings suggest that older volunteers contribute substantially to community life throughout Northern Ireland using their skills and expertise to benefit others. The study found there were clear benefits for older volunteers in terms of maintaining physical and mental health through engaging and helping people in their communities.”

The full report outlining the findings of the study can be found at: http://www.science.ulster.ac.uk/psyri/sites/psyri/IMG/pdf/FormalVolunteeringhealth.pdf