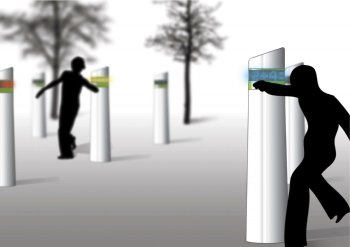 TheUniversity of Ulster is playing a key role in developing novelsports products for use in public spaces in cities across northern Europe.

Recentlyhewas on the judging panel of theProFit Innovation Award2012, an international competition for SMEsand start-up companies to develop innovative sports products or services.

Professor Wallace said:“We are providing the research expertise to determine the user needs of communities who will have access to the field labs and we will evaluate their effectiveness in delivering physical activity participation objectives.

"We are also involved in the development of novel technologies to monitor activity patterns in the field labs.”

The ProFit Innovation Award competitionaims to stimulate innovation and new business creation in the sports sector by developing an international network of Fieldlabs.

The four winners eachreceived a 20,000 Euro voucher for a prototype, to be installed in the Fieldlab.

Serious Gaming by Yalp was chosen as the overall winner and will receive an additional 20,000 Euro voucher.

Yalp designeda set of interactive poles, which offer a variety of games, including active movement and brain training. The poles are positioned in a public space, consist of a display and LED-lighting and are able to communicate text, images and animations.

In 2008 the first Fieldlab was realised in the city of Edinhoven, the Netherlands,on municipality sports grounds in a cooperative structure between public and privateparties.

It is a location wherepeopleengage in sports and play activitiesand businesses can installnew product prototypes or production models to be tested.

Fieldlabs initiate and stimulate cooperation between sports, business as well as knowledge, health and government institutes.

Parties work together on development, validation, realization and introduction of new products, services, interventions and facilities.As such, a FieldLab is an instrument for innovation and a breeding place that facilitates business creation.

At the same time, cities create attractive spaces that contribute to health and well-being, and their citizens will have new playgrounds to meet and have fun.

ProFit is funded by the European Union, under the Interreg IVB North West Europe programme. The management of the ProFit project is done by the foundation Sports and Technology in Eindhoven, the Netherlands.

Caption: An artist’s impression of the winning design in the ProFit Innovation Award2012 - Serious Gaming by Yalp.