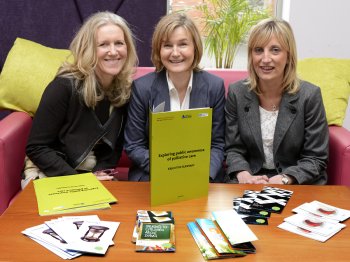 Secondary schoolchildren should be educated about death and dying – this is one of the recommendations in a new palliative care report led by a University of Ulster academic.

Dr Sonja McIlfatrick from the University’s Institute of Nursing was Principal Investigator on the ‘Exploring Public Awareness of Palliative Care’ research project.

This is the first study of its kind in Northern Ireland to explore public perceptions towards palliative care.

Findings from the research, undertaken by executive committee members for the Northern Ireland Palliative Care Research Forum, have been published during ‘Dying Matters Awareness Week’.

Dr McIlfatrick said: “By 2017, 16 per cent of the NI population will be aged 65 years or over. Given that the prevalence of chronic conditions increases with age, the demand for palliative and end of life services is likely to increase.

“Raising the awareness of palliative care and exploring the public’s perceptions and views of such services is key to ensuring that people are well empowered to make informed choices.”

Angela McVeigh, Chair of the Regional Raising Awareness and Understanding Subgroup, and Director of Older People and Primary Care at the Southern Health and Social Care Trust, said: “This research demonstrates that current public understanding within Northern Ireland about palliative care is limited and is most often gained through personal experience.

“Various strategies for improving public awareness were identified, including the need for education and publicity. The public recognise that there is reluctance to talk about death and dying but believe that education should be focused around public media interventions and a broader and more widespread use of the term ‘palliative care’.

Dr McIlfatrick, who is also Head of Research at the All Ireland Institute of Hospice and Palliative Care (AIIHPC), added: “Our research found that the key barrier to improving awareness was reluctance among the general public to talk about death and dying. This was attributed to fear and a taboo within society to openly address such issues.

“A widespread education programme among adults and secondary schoolchildren would help to change these attitudes.”

The report recommended that:

- Cultural change is required to remove taboos of talking about death and dying in Northern Ireland.

- A widespread public education programme using a broad approach and targeted at different groups is required to enhance public awareness of palliative care in Northern Ireland;

- Public education should begin in secondary schools to increase children’s awareness of end of life issues;

- Public education in adults should be delivered in community settings where the public congregate, for example, churches and community centres;

- Education should be delivered by professionals or service users with experience of delivering or receiving palliative care using a range of methods to suit different target audiences;

- The public should be educated about the wider definition of palliative care, not just focusing on end of life care;

- A multi-media approach should be used to increase public awareness of palliative care including magazines and newspapers, posters, TV and radio adverts;

- Palliative care services should be mainstreamed and integrated with other care services to avoid public and professional confusion.

The research team included staff from the University of Ulster and Queen’s University Belfast as well as other researchers from NI Hospice, Marie Curie Cancer Care and the Patient Client Council.

The respondents who took part in the survey were members of the Northern Ireland Patient and Client Council’s Membership Scheme. It was set up as a meaningful way of involving the public on health and social care issues.

To mark ‘Dying Matters Awareness Week’ (13 - 19 May 2013) the Public Health Agency (PHA) is urging everyone to take the opportunity to talk openly about dying, death and bereavement with those closest to them.

The theme for this year’s campaign is ‘Be ready for it’, a focused call to action aimed at encouraging members of the public to take five simple steps to make their end of life experience better, both for them and for their loved ones.

Caption: (left to right) Maeve Hully, Chief Executive of Patient and Client Council, Angela McVeigh, Chair of the Regional Raising Awareness and Understanding Subgroup, and Director of Older People and Primary Care at the Southern Health and Social Care Trust and the University of Ulster’s Dr Sonja McIlfatrick.