Key report into the human impact of the 'Troubles' 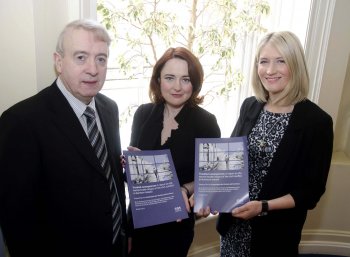 People who have experienced a traumatic event have an increased likelihood of developing a range of physical and mental health conditions, according to University of Ulster research.

This was the key finding of‘Troubled Consequences’ - a report on the mental health impact of the conflict in Northern Ireland.

It presents results from the analysis of data on the mental and physical health outcomes for individuals who had experienced a traumatic event.

The research was conducted by Professor Brendan Bunting, Dr Siobhan O’Neill and Dr Finola Ferry from the Bamford Centre for Mental Health and Well-Being at Ulster’s Magee campus.They found thatin addition to the many traumatic events thatindividuals have experienced in the course of life, conflict related traumatic events had been experienced by four out of every ten people.

Commenting on the level of trauma experienced by the population,Professor Buntingsaid the health consequences of the conflict in Northern Ireland were not well understood until this research was undertaken.

“It is clear from the findings that the violence linked to the Troubles has been a major source of sufferingfor the NI population – stress that has endured over the thirty five or more years of conflict," he said.

"The health consequences of the conflict were all too often minimised and ignored.”

Professor Bunting continued: “The psychological consequences of trauma have been well documented in literature over the centuries.This report clearly shows that for many individuals in Northern Ireland this relationship between traumatic events and their psychological consequences has been, and continues to be, a real lived experience for all too many. For many of these individuals, this is a hidden cost that has not gone away.”

Dr Siobhan O’Neill explained that it is important that those charged with shaping policy had access to relevant research to ensure that they were able to make informed decisions.

“Our research was heavily cited in CVSNI’s comprehensive’ needs assessment
and it is important to ensure that the delivery of services is appropriate and will meet their needs.”

"At 8.8%, NI has the highest rates of Post-Traumatic Stress Disorder among the 30 countries in the World Mental Health Surveys, and at least a quarter of this figure is attributable to events associated with the conflict.

“We have now established that trauma is also shown to be linked to an increased likelihood of developing a range of physical health conditions including arthritis, musculoskeletal pain, asthma and stomach ulcers,” said Dr O’Neill.

“In addition, there were often lengthy delays before people sought treatment for their condition and, as a result, many individuals with these disorders still remain untreated.

Dr O’Neill said their findings reiterated the need for accessible, evidence based treatments that are tailored to the needs of people who have suffered, and continue to suffer, as a consequence of the NI conflict.

Dr Ferry added that itwas striking to find that NI has such high levels of PTSD even compared to other areas of conflict.

“We think this is linked to the years over which the violence continued and to the inter-community nature of the violence.Also, the violence has resulted in high levels of other mental health disorders and is linked with higher levels of chronic physical health problems.

“We found too that people suffering trauma related disorders had difficulties in both seeking help and in finding services that were helpful for them. The clear message is that the need is significant and that there need to be major advances in evidence based services for trauma sufferers,”she said?

“The Troubled Consequences Report represents a very significant contribution toimproving our understanding of the profound impact of the Troubles on the mental health of those affected by conflict-related trauma.

“The Report provides a set of evidence-based findings and recommendations that will directly inform the Commission’s CNA analysis relating to addressing the mental health needs of victims through effective service provision,” said Dr Ferry.

Neil Foster from the Commissioner’s Office said theaim of the seminar was to share the research findings with a wider audience of people working with victims and survivors and to consider what impact the research has on the development of future trauma services.

The report is one of a series of studies into the impact of the Troubles supported by the Commission for Victims and Survivors.

Participants at the seminar will include representatives from a range of organisations receiving victims funding who provide counselling and psychotherapy to individuals and families psychological impacted by the conflict. Representatives from political parties and from the health and social care systemwere alsoin attendance.