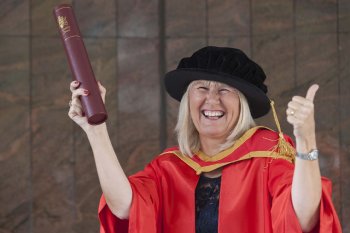 Churches need to address growing pressures on clergy who support parishioners through traumatic experiences, research carried out by a University of Ulster PhD researcher has found.

Jill Hendron’s project focused on the experience of secondary trauma among the Irish clergy.

The Lisburn woman who is now a lecturer in counselling at the University’s Jordanstown campus, graduates today from the School of Communication.    Jill said: “People often turn to the church when they are experiencing a traumatic time in their life. In these situations, clergy can also experience the emotional weight of the problems, which they are supporting individuals, families or communities through. This experience is known as secondary trauma."

The issue was highlighted in the media recently with the tragic suicide of Father Matt Wallace, 69, who had been based in west Belfast for four decades. His funeral congregation was told that the growing demand on a diminishing number of priests is physically and mentally challenging and for some it is becoming intolerable.

Jill said: “It is well documented that there is a cost to caring professionals supporting those who have experienced trauma and crisis. They may be impacted by their vicarious exposure to the trauma others have experienced.

“While the issues of stress and burnout within the ministry have previously been examined, little is known about the impact upon clergy as a result of supporting individuals, families and communities through their daily pastoral ministry.”

The three-year project, funded by the Departmetn for Employment & Learning, examined the impact upon clergy within one of the four main Irish churches as a result of working with trauma and crisis within their pastoral ministry.

The results of this study draw attention to several important issues in relation to this topic:

- Tthis involvement does appear to have an impact upon clergy and many feel they are insufficiently prepared or supported for this challenging aspect of their ministry;

- the literature on this topic suggests that inexperience in ones role is a particular risk factor. However, it appears that for clergy the opposite may be the case and experience in their role places them at additional risk.

This is due to many of the anomalies of the clergy role which in comparison to other caring professions involves clergy being involved often as first responders in the early aftermath of events but also in a long term supporting role as weeks, months and sometimes years go by.

This blurring of the personal and professional boundaries means that clergy are often required to go through these experiences with individuals, families and communities regarding them as friends rather than simply parishioners.   Jill points out that many clergy find it difficult to deal with the spectrum of emotions they are expected to display within a day as they can be required to move from very tragic circumstances to very happy ones and vice versa within a short space of time.

She said: “Emotional Intelligence does appear in the main to be a positive influence within this experience. Those clergy with higher levels of Emotional Intelligence appeared to self-monitor for signs of impact, show compassionate towards themselves and seek out appropriate support should the need arise.

“While on the surface protestant clergy would seem to be at an advantage over their Catholic counterparts due to the fact they have informal support networks in the form of their spouses, there does appear to be an issue with the stresses of the ministry being passed on to these informal supporters due to the lack of formal support structures.

“Clergy spoke of a range of barriers to them seeking help. Some of these involved a lack of organisational structures; the stigma of seeking help and how their superiors and their parishioners would view this negatively; the lack of sympathy from the public and the media due to the clerical abuse scandal.

Jill added:“Dealing with secondary trauma is an important issue and one which needs to be recognised and addressed at organisational (Church) and parish level, and by the clergy themselves in order to ensure their well-being and the sustainability of their ministry.”