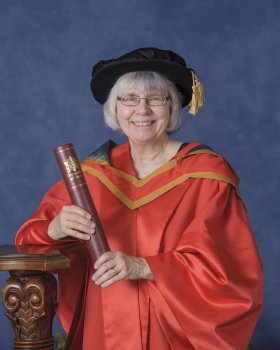 Distinguished US-based inter-faith peacemaker Dr Sally Milbury-Steen will today receive the honorary degree of Doctor of Laws (LLD) from the University of Ulster in recognition of her contribution to peace and reconciliation in Northern Ireland.

As executive director of the Delaware peace organization Pacem in Terris since 1985, Dr Milbury-Steen has worked with a revolving pool of 80 volunteers, and the occasional staff person, on an array of projects including; responding with peace and activism to the events of September 11; teaching conflict resolution skills to elementary students and offenders; working to abolish the death penalty in Delaware; and helping ex-prisoners.

She has also been the inspiration behind the Ulster Project Delaware, which since 1977 has brought Catholic and Protestant teenagers from Northern Ireland to Wilmington, Delware, during the month of July.

Over 800 young people have benefited from the Ulster Project Delaware, building a better understanding and awareness of the culture and diversity of views in Northern Ireland and the need to go forward to a shared future.

A native of Delaware, Dr Milbury-Steen served in the US peace Corps in Africa, and was later a Fulbright lecturer in Gabon.

She has contributed to the social and cultural development of Northern Ireland through the vision she has shared with its young people and leaders who have worked with her over the past 30 years to create a more just, inclusive society.