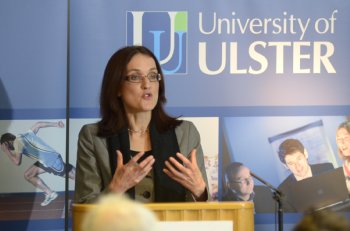 Secretary of State Theresa Villiers speaking at the Belfast campus

The University of Ulster is playing a vital role in making Northern Ireland an attractive destination for inward investment, the Secretary of State for Northern Ireland Theresa Villiers said today.

Ms Villiers was speaking during a visit to the Belfast campus where she delivered a keynote address on the political and economic challenges facing Northern Ireland and where she was briefed on the University's plans for an expanded city centre campus with state of the art teaching and learning and research facilities.

The Secretary of State told an audience of students and academic staff: "I also (would like to) pay tribute to our hosts this evening, the University of Ulster, for the role that they and Queen's University play in enhancing the attractiveness of the Northern Ireland for inward investment.

"As well as delivering world-class teaching across the full range of disciplines, both universities are involved in cutting edge research and spin-off businesses creating jobs for local people and developing products that change lives."

The Secretary of State's speech covered a range of issues including the need for politicians to drive forward the agenda for a shared future in Northern Ireland and the economic challenges facing the province.

On the shared future agenda, she urged politicians in the province to build on the political progress that has been made in recent years and address long standing divisions in society which were proving too costly.

On the economy, Ms Villiers said the Government was determined to put the whole of the UK, including Northern Ireland, back on the right path to growth and recovery but that had meant addressing the largest deficit in the country’s peacetime history.

She noted while the deficit had been reduced by a quarter, the government had been able to support Northern Ireland with the highest grant per head received by any constituent part of the UK.

Reductions in spending in Whitehall Departments and a shift to capital investment in the Autumn Statement would also result in the Northern Ireland Executive benefitting from an further £132 million of capital funding, she said.

"By the end of this Parliament, Corporation Tax will be down to 21 per cent - the lowest of any major western economy," Ms Villiers said.

"And we are continuing to consider the case for devolving Corporation Tax.

"We’ve introduced the Funding for Lending scheme to get much needed capital flowing to businesses. Our changes to tax allowances will mean a tax cut for 615,000 people here - with 8,000 people lifted out of tax altogether.

"Businesses and families will also be helped by the Chancellor’s decision to cancel January’s planned fuel duty increase - meaning that a litre of unleaded is now 10p cheaper than it would have been had we stuck to the previous Government’s plans.

"Of course, we recognise that there’s still a long way to go. We are dealing with the toxic legacy of debt and we’re hugely impacted by Eurozone instability.

"But we are on the right road and the last few months have witnessed first tentative signs that the economy is starting to heal.

"There’s no doubt that the road to economic recovery is a long one and it’s difficult one but we are making real progress," she concluded.

Audio of the Secretary of State's speech can be heard at: