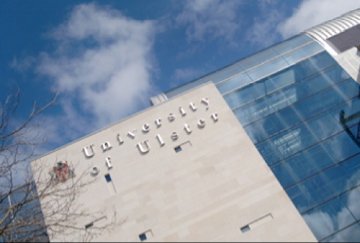 The University of Ulster is one of just 11 UK universities to attain the European Commission’s HR Excellence in Research Award this year.

The award, which was announced today, recognises the University’s commitment to improve the working conditions and career development of its research staff which will, in turn, benefit the quantity, quality and impact of research for the benefit of the society and the economy.

Professor Hugh McKenna, Pro-Vice-Chancellor Research and Innovation, said the University of Ulster was delighted to have been selected for the European Commission award.

“The University of Ulster is very proud of the quality and impact of our research and we very much believe the development of our staff is critical to that success,” he said.

“Ulster has 15 research institutes where staff are translating the knowledge they acquire to create a better society and a healthier economy.

“We are proud that in the last UK-wide research assessment exercise, Ulster was in the top third nationally for research strength. We were the only institution in Northern Ireland to have institutes in the top three nationally in their respective fields – in biomedical sciences, nursing and Celtic studies.

Employment and Learning Minister, Dr Stephen Farry said: "I would like to commend the University of Ulster in being one of the UK Universities to be recognised by the European Commission for this prestigious HR Excellence in Research award.

“This award reflects the university's commitment to the career development for research staff and underlines the vital role played by our higher level institutions in conducting world-leading research and innovation which delivers real economic benefits to Northern Ireland.

“The University of Ulster has long placed an emphasis on the welfare and development of researchers which is clearly demonstrated through this latest recognition from the Commission.

“This award is also timely in the wider context of EU research following my recent announcement with Minister Foster of the new DEL/DETI Higher Education EU Support Fund which will assist the universities to develop and implement a strategic approach to becoming more successful in the European Research and Development arena, particularly the forthcoming Horizon 2020 programme.”

Ulster and 10 other universities in today's announcement have become the latest recipients of the award.

The other universities include the University of Warwick and Imperial College in London, while the Universities of Edinburgh, Exeter and York have retained the status they achieved two years ago.

David Willetts MP, Minister for Universities and Science said the award to Ulster and the 10 other universities showed the UK’s world class universities were leading the way.

“It is great news that another 11 UK universities have been awarded the HR Excellence in Research Award,” he said.

“It's vital that the working conditions of researchers continue to improve because world-class science and research are the key to future economic growth.

“The total number of UK institutions with this award is higher than in the whole of the rest of Europe put together, which is a great testament to the strength of our research base.”

The European Commissioner for Research, Innovation and Science, MÃ¡ire Geoghegan-Quinn, said UK universities were to the fore in strengthening their research base and ensuring their staff had the right skills.

“It is good to see so many organisations putting in place strong support for researchers and their careers,” she said.

“The European Commission is committed to supporting research and innovation across Europe, through its Innovation Union flagship initiative and Horizon 2020 programme. What we now need is to prioritise investment in research, with strong budgets at the national and European levels.”

Ellen Pearce, Director of Vitae which represents the UK on the European Commission HR Strategy Group and which announced the award winners, said to demonstrate their suitability for the award the universities had to produce robust implementation plans for how they would attract, manage and develop research staff.

“This is part of the strategy outlined in the Concordat to increase the attractiveness and sustainability of research careers in the UK, and to improve the quantity, quality and impact of research for the benefit of UK society and the economy,” she said.