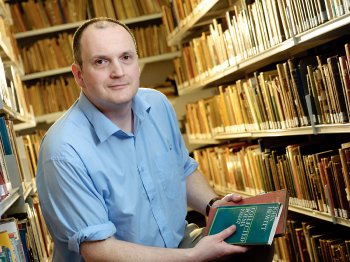 The University of Ulster is currently developing the province’s first dedicated Ulster-Scots Literary Encyclopaedia - the first of its kind to draw together and make accessible information on Ulster-Scots writers for schools, academics and the general public

The project will create an innovative and informative guide to Ulster-Scots literature and language, which will be supplemented by an online database of Ulster-Scots writers from 1600 to the present day.

The Ulster Historical Foundation will publish the printed encyclopaedia later this year.

As part of the project’s outreach activity, two conferences, organised by the University of Ulster, will run at Mossley Mill in Newtownabbey, Co Antrim on Thursday, February 28 and in the Senate Room, University of Glasgow on Friday, March 15.

These conferences will bring together experts on Ulster and Scottish literature, language, history and culture who will discuss the cultural impact of Scotland upon Ulster and other, perhaps less explored phenomenon of the influence of Ulster upon Scotland.

The Glasgow conference - 'Back to the Mother Country? The Impact of Ulster-Scots Writing on Scotland 1750 – 2013’ – on March 15, will examine literary, cultural and religious connections between the province of Ulster and Scotland and will feature talks by University of Ulster experts as well as Ulster-Scots academics from England, Scotland and Dublin.

A book of proceeding will be produced that brings together the findings of both conferences.

There will also involve an extensive public outreach programme that will provide talks and workshops in schools and libraries around Northern Ireland.

“We look forward to sharing this research at a local, national and international level, and would be keen to hear from any school or community group who might like to hear more about Ulster-Scots literature.”

For further details about the conferences or the encyclopaedia and outreach programme, contact, FrankFerguson (f.ferguson@ulster.ac.uk, T: 028 70123577).

Newtownabbey Conference: ‘Channelling Links: An Exploration of the Literary and Linguistic Culture of Ulster and Scotland’

GLASGOW CONFERENCE: 'Back to the Mother Country? The Impact of Ulster-Scots Writing on Scotland 1750-2013’

This conference will examine literary, cultural and religious connections between the province of Ulster and Scotland.

In the past the literary relationships across the water, at least in terms of Ulster-Scots studies, have been viewed as a form of one-way traffic, in which Scottish literature and culture was exported to Ulster, but with very little travelling in the opposite direction.

This conference seeks to challenge this stereotype by exploring a number of Ulster writers, initiatives and institutions that had a significant impact upon Scottish literature, language and culture.

Drawing from key interactions between the two countries from the 18th to the 20th centuries, this symposium will discuss the lesser-charted cultural exchange that was initiated from and generated by the province of Ulster.

Dr Carol Baraniuk (University of Ulster) ‘Out of the Box: Insights into the Ireland-Scotland connection from a Glasgow collection of popular poetry and song’

Prof Gerry Carruthers will chair a round table discussion on further developments of Ulster-Scots Studies in Scotland.

RSVP by 8th March 2013 to RobertBurnsStudies@glasgow.ac.uk