Beyond The Walls - Taking Learning Out Of The Classroom 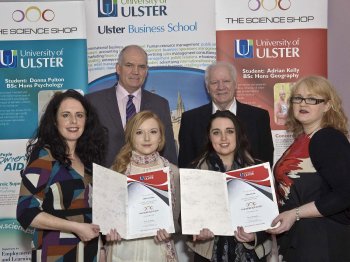 Advertising students at the University of Ulster’s Magee campus in Derry~Londonderry have come up with some novel ideas to mark the 400th anniversary of the building of city’s historic walls.

As part of their Creative Development module, second year students worked with the Holywell Trust - a local community organisation based inside the 17th century historic walls - and the University of Ulster’s Science Shop to brand the city’s walls and create events to mark the occasion.

“While most of the students had heard about the walls, only a handful had actually walked around them and fewer still knew about their historical significance,” she said.

“The Walls 400 project was a real eye-opener for the students. It made them realise how the walls are a unique attraction with lots of potential, both as a venue for events which could help attract visitors to the area and to create a better understanding of our cultural heritage.

“The students really benefited from the ‘hands on’ experience of working on a real project for a client and the process of creating and developing advertising materials for a range of events, right through to pitching their ideas. By taking learning out of the classroom, the students were able to appreciate the practical application of theory.”

Edel explained that to get their creative juices flowing, Mark Lusby, City Walls Heritage Project Officer with the Holywell Trust took the students on a guided walking tour around the walls.

He said: “2013 is the 400th anniversary of the start of the building of Derry’s walls and the Holywell Trust is implementing a three-year programme of activities to engage people with the heritage of the walls.

“We were delighted to get an opportunity to work with University of Ulster Advertising students. Their ideas and creative approaches are very refreshing and will certainly inform the events that we are planning for the later this year.”

Asheline McCloskey from Sion Mills and Colleen McCabe from Armagh won £100 (sponsored by the Science Shop) for their winning pitch which included developing a series of fun activities. They also came up with a logo and brand for the event, a professionally-recorded radio advert and a series of branded printed media, including leaflets and balloons and party boxes.

Magee student Caoimhe McFadden’s pitch came second and won £75 (sponsored by Holywell Trust) for her pitch entitled ‘Walls 400 – How will you see them?’

Caoimhe explained that her idea for an educational campaign targeting local schools to encourage school children to visit the walls was inspired by her young son.

“He was fascinated by the cannons and I decided to approach my campaign from a child’s perspective as a way of encouraging people from the city to take a new look at this historic monument,” said Caoimhe. The joint third prize of £50 each (sponsored by the Holywell Trust) went to Rodney Johnston from Kilkeel and Kel Dickson, Dungannon for their project ‘Walls 400 Let Us’; and to Janeen Leese, Shonee McWilliams, Lindsay Shannon and Tianjun Xie for ‘The Walls’. The latter group focused on cultural and sporting activities that could be centred on the walls such as an outdoor cinema, supper club and music event.

Course Director of the Advertising Programme Ms Marian Norwood said she was delighted with the success of the project: "The Advertising degree programme offered by the Ulster Business School at Magee is the only one of its kind in Ireland.

“Partnering with the Holywell Trust allowed us to go beyond the books and classroom walls and provide our students with an exciting, realistic and meaningful advertising challenge."

Congratulating all the students on both their creativity and commitment, Claire Mulrone from the Science Shop said: “The whole class took on the challenge of working on an live advertising brief and did a terrific job for the Holywell Trust – who will taking their innovative ideas on board to build a campaign.”