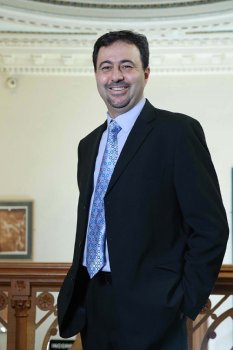 A University of Ulster academic has been named as one of the world’s most influential people in the reduction of armed violence.

Professor Brandon Hamber, Director of the International Conflict Research Institute (INCORE), at Magee, was selected as one of the top 100 people trying to change the world for the better by Action on Armed Violence (AOAV).

Founded in 1992 as the UK branch of the International Campaign to Ban Landmines (ICBL), it has played a leading role in landmark humanitarian disarmament agreements. In 1997 ICBL was co-laureate of the Nobel Peace Prize.

Staff at AOAV cited Professor Hamber as one of 100 people who have dedicated their lives to making the world a safer place and who are outstanding examples of those trying to change the world for the better.

Professor Hamber is recognised alongside United Nations officials, Nobel Peace Prize Laureates and celebrities such as George Clooney and Angelina Jolie, for his contribution to peace building.

As Director of INCORE, Professor Hamber leads Ireland’s premier conflict research institute, which was established in 1993 at Ulster’s Magee campus in association with the United Nation’s University.

He is a conflict transformation researcher and practitioner who has worked in South Africa, Northern Ireland, Liberia, Mozambique, the Basque country and Sierra Leone, among other countries.

He has written extensively on the South African Truth and Reconciliation Commission, the psychological implications of political violence, trauma and the process of transition and reconciliation in South Africa and in Northern Ireland.

Prior to moving to Northern Ireland in 2001, he worked for the Centre for the Study of Violence and Reconciliation in South Africa.

Professor Hamber said: “I was surprised to find that I had been named on the list, particularly in light of the achievements of the other nominees. It is a real honour.

“Of course I cannot separate out the recognition of my work over the years from the colleagues and organisations I have worked with, most notably in recent years colleagues at INCORE at the University of Ulster who have been pioneering peace work here and globally for the last 20 years.”