The International Loebner Prize 2013 Contest in Artificial Intelligence (AI) will be hosted for the first time on the island of Ireland by The University of Ulster on Saturday, September 14th, 2013. 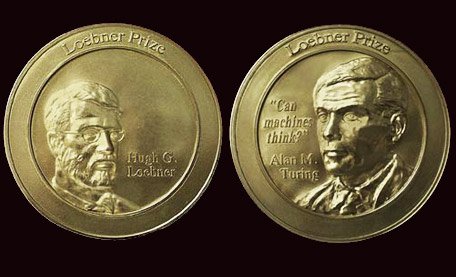 The International Loebner Prize 2013 Contest in Artificial Intelligence (AI) will be hosted for the first time on the island of Ireland by The University of Ulster on Saturday, September 14th, 2013.

Loebner Prize 2013 will be held at the Magee Campus during the CultureTECH digital technology, media and music Festival and City of Culture 2013 celebration.

The Loebner Prize Contest seeks to find the world's best conversational chatbot computer program. It is the first formal instantiation of `The Turing Test' which is named after Alan Turing, the brilliant British mathematician who also developed basic research on the theoretical foundation of computing science.

Each year an Annual Prize and Bronze Medal is awarded to the most human-like computer.

Loebner Prize 2013, in collaboration with Foyle Learning Community and TeenTech CIC founded by Science broadcaster Maggie Philbin (of BBC's Tomorrow's World) and Chris Dodson, Chairman of the Institute of Directors (England South), also includes a Junior Loebner Prize in which the judging panel consists of school pupils between 12 and 14 years old.

The Contest will precede an International Workshop on, ``Waiting for Artificial Intelligence…'', also being held at Magee Campus on Sunday, 15th September, 2013.

Loebner 2013 is directed by Professor Paul Mc Kevitt of the Computer Science Research Institute (CSRI) at Magee and produced by Dr. Hugh Loebner, together with Production and Location Crews and casting of Contest Entrants and International Expert and Junior Judging Panels.

Professor Paul Mc Kevitt said: “Hugh Loebner's choice of Ulster for this competition has not been by chance. Ulster's Computer Science Research Institute (CSRI) has had an association with the field of Artificial Intelligence (AI) research for many years, with much of the research in Computer Science on three campuses focusing on this topic.

“Professor John McCarthy from Stanford University (USA), who named this field at the Dartmouth, USA conference in 1956 spoke at the Irish Artificial Intelligence and Cognitive Science Conference (AICS-1997, Magee).

“Professor Noel Sharkey, Professor of Artificial Intelligence and Robotics at The University of Sheffield, previously awarded an Honorary Doctorate (D.Sc.) by the University of Ulster (2006) and Visiting Professorship to the CSRI, is a member of the Loebner Prize 2013 international expert judging panel.

Dr. Hugh Loebner said: “Ulster's research strengths in AI and new developments in the use of AI combined with creative arts and technologies in serious computer games, online learning and emotion modelling makes it an ideal host for Loebner Prize 2013.

“The CultureTECH 2013 international digital media and creativity Festival and The City of Culture 2013 celebration provide an appropriate backdrop for staging The Loebner Prize.

“The Turing Test tests skills in language understanding and production which is as much central to the arts as it is to science. Hence, The Turing Test by its very nature is interdisciplinary and tests multiple facets of human intelligence in the spirit of Renaissance Man, Leonardo da Vinci.”

Further information on Loebner Prize 2013 is available at:


Caption: An 18kt solid Gold Medal (pictured) & $100,000 prize is awarded to a machine that generates responses that are indistinguishable from a human.
Back to Top