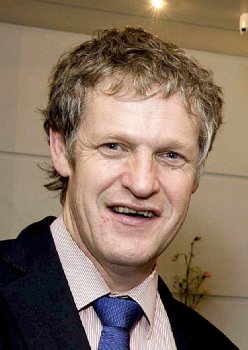 Dr Morrow, of the School of Criminology, Politics and Social Policy, will chair a panel that will examine the scale and nature of religious bigotry in Scotland, assess efforts to tackle it and advise Ministers on policies and initiatives to combat sectarianism.

The group, which features other academics and practitioners with experience of working in the field and in communities, will also look at the criteria for assessing applications for funding, write a report on evidence regarding sectarianism and develop a research and evidence -gathering process to fill gaps in knowledge of sectarianism in Scotland.

Dr Morrow, a former chair of the Community Relations Council in Northern Ireland, said he was honoured to have been asked by the Minister for Community Safety and Legal Affairs, Roseanna Cunningham, to chair a group which could shape Scottish Government policy in such an important area.

“'The advisory group will work hard to ensure that our advice is rooted in real evidence and practical experience," he said.

"We look forward to engaging with those who have worked to reduce sectarianism over many years and with organisations, agencies and people who have to deal with the reality of ongoing violence and exclusion in coming to our conclusions.”

Ms Cunningham said the advisory group would have a key role to play in the Scottish Government's efforts to rid Scottish society of the scourge of sectarianism.

“We have always said that tackling bigotry and hatred isn’t just about legislation, but about wider action to help bring communities coming together, and that’s why we set aside £9 million over three years to take this forward," she said.

“We will be gathering evidence on the nature of sectarianism in Scotland as well as the impact and effectiveness of these different interventions, and the Advisory Group will play a crucial role in this work.

“The work which Dr Morrow and his colleagues have agreed to take forward will ensure that future measures to tackle this issue are based on evidence.”

The remit of the advisory group is to:

Develop and analyse a body of empirical evidence to give Scottish Ministers robust and informed advice on the nature, extent and impact of sectarianism on modern Scottish life.
Assess and monitor current practice to tackle sectarianism and advise Ministers on potential improvements and priorities for public support.

Work with anti-sectarian practitioners, and with organisations with an interest in making change, to identify appropriate models for delivering positive outcomes at community level, and to explore opportunities for co-operation and collaboration among those practitioners and organisations.

Use all of the evidence and information gathered to advise Scottish Ministers on priorities for policy, and on action, to address and reduce sectarianism.

Respond to Ministerial requests for specific advice in this area as required.
The Advisory Group will be a short life working group which will terminate at the end of the current financial year (31 March 2013).

The membership of the group is as follows:

Dr Morrow has 10 years experience working in Northern Ireland as a member and chair of the Community Relations Council. An academic at the University of Ulster's School of Criminology, Politics and Social Policy, he has worked with many organisations tackling sectarianism in Northern Ireland. Dr Morrow attended school in Scotland and obtained his PhD from the University of Edinburgh.

Dr Clegg is Senior Lecturer in Practical Theology at the University of Edinburgh with a long standing specialism in sectarianism.

Dr Clegg’s work has included both academic studies of sectarianism as well as applied field work in Northern Ireland. She has strong links with various churches and community groups throughout Scotland.

Rev Galloway is a former convener of the Church of Scotland’s Church and Society Council.

He is the minister to a Gorbals parish and works regularly to combat sectarianism in the Glasgow area.

He has a wide range of contacts within the Protestant churches and organisations such as the Orange Order.

Ms Lynch brings experience of the provision and governance of services to faith communities. She also has a wealth of contacts including many throughout the Catholic church and civic Scotland.

Dr Rosie is Co-Director of the Institute of Governance at the University of Edinburgh. He has a longstanding research interest in sectarianism and will ensure evidence is rigorously challenged before it is accepted.