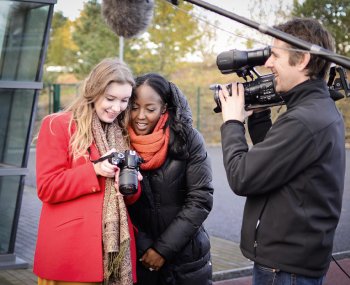 University of Ulster students have thrown their support behind a drive to get as many volunteers as possible for the 2013 World Police and Fire Games.

The students signed up to become volunteers as BBC1’s ‘The One Show’ dropped into the Jordanstown campus to promote volunteering for the Games.

The World Police and Fire Games, which will take place on August 1-10 next year, are expected to bring to Northern Ireland an estimated 10,000 competitors from the around the world and 15,000 family and friends.

Presenter Angelica Bell and her ‘One Show’ crew are on a mission to sign up as many volunteers as possible for the Games, which will feature approximately 66 sports.

Students from the University of Ulster’s photography and sports studies degree courses took part in filming and were interviewed at the £13 million sports centre in Jordanstown for the programme.

The High Performance Centre, which was opened in November 2008 by the chair of the organising committee for the London 2012 Olympic and Paralympic Games and University of Ulster honorary doctor Lord Coe, is home to the Sports Institute of Northern Ireland.

The world class sports facility has been used as a training base for London 2012 Olympians and Paralympians as well as the Ulster Rugby squad, Irish cricketers, leading European Tour golfers, motorsport and Gaelic Games stars.

The students’ interviews will be screened during a live programme from Belfast City Hall on Wednesday evening (October 31).

BA (Hons) Photography Course Director, Peter Neill, said: “This was a wonderful opportunity for some of our students to demonstrate their talents on a national TV programme.

“The students also signed up to volunteer at next year’s Games, which will be a once-in-a-lifetime experience for them.”

Anyone interested in taking part in the live show and/or volunteering for the Games should go along to the Great Hall in the City Hall at 6pm.

Caption: University of Ulster photography student, Amy Higgins, is interviewed by The One Show presenter, Angelica Bell, at the Jordanstown campus.