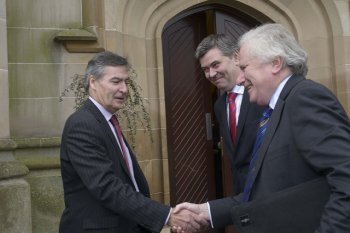 The Human Rights Act has established a more logical and sensible arrangement for the litigation of human rights, according to Lord Kerr, the former Lord ChiefJustice for Northern Ireland.

Lord Kerr was speaking to an audience of law students and representatives of the local legal profession at a guest lecture hosted by the Graduate School of Professional Legal Education at the University of Ulster’s Magee campus.

Up until 2000, UK citizens had to take complaints to the European Court of Human Rights in Strasbourg but under the Human Rights Act,which came into effect in October of that year,these cases have been heard in the UK.

ord Kerr said the situation prior to 2000 was unsatisfactory and anomalous for a number of reasons - the citizen had to exhaust domestic remedies so proceedings were protracted; the Strasbourg court was not necessarily familiar with domestic circumstances and the range of reliefs that the Strasbourg court could give were more restricted than a domestic court.

“The opportunity exists for us to develop a brand and a body of human rights law which is different from the Strasbourg orthodoxy but which meets the needs of this country’s citizens and reflects the standards that this country expects. Where those needs and those standards require it, that opportunity is also our obligation,” he said.

Lord Kerr was making a return visit to the Magee campus. He last visited the campus in his role as Lord Chief Justice when he officially opened the Graduate School of Professional Legal Education in 2008.

Welcoming Lord Kerr, University of Ulster vice Chancellor, Professor Richard Barnett said the opening of the Graduate Law School marked a significant milestone for the university’s Magee campus as for the first time ever graduate law students could now train as solicitors in the north west.

“The Graduate Law School at the Magee campus was launched in very difficult and challenging times, but it has survived and flourished thanks to the hard work of the staff and the support of the profession.” he said.

Caption University of Ulster Vice Chancellor Professor Richard Barnett welcoming the Right Hon the Lord Kerr of Tonaghmore to the Magee campus where Lord Kerr was guest speaker at an event hosted by the Graduate School of Professional Legal Education. Also in the photograph is Mr Paul Mageean, director of the Graduate School.