Languages for the Future 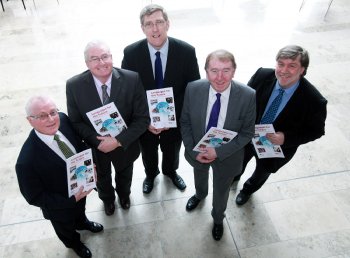 The importance of future generations in Northern Ireland learning languages to keep up with an increasingly globalised society was a key theme of a conference held at the University of Ulster this week.

The purpose of the conference was to outline the key proposals of the Northern Ireland Languages Strategy, Languages for the Future, with a view to encouraging the development of language teaching and learning in Northern Ireland.

Professor John Gillespie, from the University of Ulster, one of the Strategy’s authors, said: “In order to encourage more people to speak foreign languages we need to begin teaching them in primary school. In addition the teaching of languages need to be vocationally relevant. This means enhancing the training of language teachers, especially in enabling all the benefits of the internet age to be used to allowing children and young people to develop language skills in this multilingual, globalised age.”

Education Minister John O’Dowd attended the event and was welcomed to the campus by Professor Alastair Adair Provost of the Belfast campus and PVC for Development.

Professor Adair underlined the commitment of the University of Ulster to the learning and teaching of languages, in particular, the recent establishment of the Confucius Institute at the University.

Minister O’Dowd said: “I believe that developing languages skills can help our young people become creative, confident and articulate individuals, able to play their full part in society and achieve their full potential.

“Schools are encouraged to offer a wider range of modern languages, and the revised curriculum provides them with greater flexibility to do so. We know from experience in other European countries, and our own Irish-medium sector, that an early start to learning a second language is a key way of ensuring success in language learning at post-primary level and into adulthood.”

Professor David Johnston (QUB) and Professor Ailbhe Ã“ CorrÃ¡in from the University of Ulster were co-authors of the Strategy.

The Languages Strategy for Northern Ireland was created against a background of profound change. Globalisation, the continuing development of the European Union, the growth of low cost air travel and demographic change are factors that are already affecting Northern Ireland’s society and its economy and will continue to do so for the foreseeable future.

It was developed over a number of years by an extensive process of consultation with the public, key interest groups, language experts and stakeholders both on-line and at a series of targeted events held throughout the Northern Ireland.