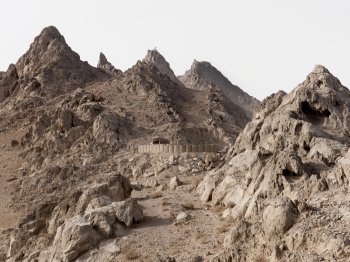 A powerful exhibition of photographs of military bases in Afghanistan by Magnum photographer and University of Ulster lecturer, Donovan Wylie, has opened at The Royal Ontario Museum, Toronto.

The acclaimed showcase brings together recent images from Belfast-born, Wylie’s ‘Outposts’ project and those of fellow Magnum photographer, Canadian, Larry Towell. The two men explore the consequences of the conflict in Afghanistan from different perspectives - Towell’s black and white pictures reveal the devastating effects of war on the citizens, soldiers and landscapes of the country, while Wylie’s colour photographs document operating bases built by the Canadian military for surveillance and defence.

Working with the Imperial War Museum (IWM), a major partner in the project, ‘Outposts’ was funded by the prestigious Bradford Fellowship (awarded to Wylie in 2010) and enabled him to spend six weeks of that same year in Kandahar Province embedded with the Canadian contingent of the International Security Assistance Force (ISAF).

In doing so, he became the first Imperial War Museum official photographer to work in a war zone since the end of the First World War.

Throughout his career, Wylie has remained fascinated by the architecture of conflict. His earlier work was influenced by the impact of the Troubles and the theme of military and observation buildings can be seen in his photographs of the Maze prison (‘The Maze’, 2004) and military watchtowers in Northern Ireland (‘British Watchtowers’, 2007).

Wylie’s first project for the Imperial War Museum was in 2007 and took him to the Green Zone - the heavily fortified administrative centre of Baghdad in Iraq, which had been under the control of the American occupying forces since the invasion in 2003.

Following this success, the IWM collaboration was extended to the conflict in Afghanistan.

Says Wylie: The idea for ‘Outposts’ began with ‘British Watchtowers’, but the actual reality of taking it on probably started about two-and-a-half years ago, and the researching took about a year-and-a-half.

“I was in the Kandahar province for six weeks over Christmas 2010 and worked with the Canadian military, who were wonderful in the way that they accommodated me and facilitated me.”

Wylie’s next project will be photographing outposts the Arctic which, along with ‘Outposts’ will be a feature of his solo exhibition at the Imperial War Museum, next year,

Donovan Wylie is available for interview.

Born in Belfast in 1971, Donovan Wylie discovered photography at an early age. He left school at 16, and embarked on a three-month journey around Ireland that resulted in the production of his first book, ‘32 Counties’ (Secker and Warburg 1989), published while he was still a teenager.

In 1992, Wylie was invited to become a nominee of Magnum Photos and in 1998 he became a full member. Much of his work, often described as 'Archaeo-logies', has stemmed primarily to date from the political and social landscape of Northern Ireland.

His book ‘The Maze’ was published to international acclaim in 2004, as was ‘British Watchtowers’ in 2007.

In 2001 he won a BAFTA for his film ‘The Train’, and he has had solo exhibitions at the Photographers' Gallery, London, PhotoEspana, Madrid, and the National Museum of Film, Photography and Television, Bradford, England.

He has participated in numerous group shows held at, among other venues, the Irish Museum of Modern Art, Dublin, the Victoria & Albert Museum, London, and the Centre Georges Pompidou, Paris.

In 2010 Wylie was shortlisted for the Deutsche Borse Photography Prize.

The Bradford Fellowship is a prestigious award, given to mid-career photographers or artists who have consistently achieved high standards in their work.