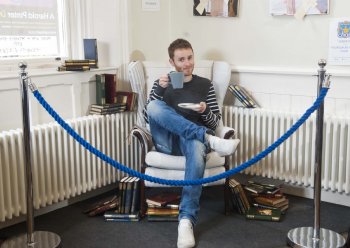 A chair which rewards visitors to arts and culture venues with perks has become a social media marketing sensation, thanks to a University of Ulster lecturer and a PhD student.

The Mayor Chair is a travelling installation made of recycled materials which is being placed for a set period of time at different venues in the province as part of an innovative research project by Interactive Media Lecturer, Alan Hook and PhD student, Oonagh Murphy.

Customers compete to become Mayor and occupy the chair by checking in through the location-based app Foursquare. The people with the most check-ins can become Mayor, entitling them to discounts, offers and other perks from the host venue.

The inaugural host of the Mayor Chair has been Belfast’s Crescent Arts Centre cafÃ© and it has been rewarding its Mayors with a free traybake with their cup of tea and coffee.

Co-creator Alan Hook observed: “People are very competitive and have really taken to the idea. It’s quirky and it’s fun.

“The real challenge is holding on to the mayorship. As soon as you take up your seat others will begin competing for it.

“It’s great for the venues as well. Using a micro-budget, we reconditioned an old chair using recycled materials that can travel from venue to venue, so there is no outlay at all.

“Also, from a marketing perspective, the project generates organic social media buzz. It gets people talking about the host venue. As people that use Foursquare are generally digitally innovative, they have a high online reach, and their opinion is widely respected.

“You can't buy this type of promotion and it is actually far moreinfluentialthan paid for advertising.”

The Mayor Chair takes pride of place in the cafÃ© or other area of the venue.If he or she so desires, the Mayor can then enjoy his or her refreshments from the comfort of the special chair in a special roped-off area.

“We have seen already that this method attracts new patrons and followings, both physically and through social networks. The project creates online buzz and can bring now audiences to a space,” Mr Hook said.

“Although, we should point out that this is a ceremonial position, which is probably a good thing because real politics is dull,” he laughed.

PhD student and co-creator of the Mayor Chair, Oonagh Murphy explained the research behind the project.

“It will also demonstrate how third-party apps can form an excellent basis for a venue-specific digital engagement project.

“We are trying to demonstrate that digital capacity building does not relysolelyon budget but also on a culture that rewards and encourages creativity, problem solving and risk taking.

“We are really keen to expand the project and have had discussions with other locations in Northern Ireland as well as venues in Manchester, London, Dublin and New York. We're interested to see how different audiences and cities react to the idea.

“The project comes from an ethos of, build it, try it, and see what happens. We want to see how small input interventions can have a large visible and tangible effect on visitor return visits, and dwell time in the spaces of the art organisation.”

Mr Hook added: “For the majority of people, Foursquare Mayor Chair mayorship is all about having a bit of fun, getting some VIP treatment and beating your friends to the title, and of course battling with them to hold on to it.

“However, just like in the world of politics, the mayorship is fickle and you are only ever one check-in away from losing your title.”

The Foursquare Mayor Chair is at the Crescent Arts Centre, Belfast until May 16. If you or your organisation would like to host the project, log on to: http://foursquaremayorchair.tumblr.com/ or contact Alan on: E: a.hook@ulster.ac.uk Twitter: @Alan_Hook or Oonagh: E: hello@oonaghmurphy.com Twitter: @Oonagh Tweets

CAPTION: Eoin Kelly, Interactive Media Arts Student at the University of Ulster, Coleraine enjoying the VIP treatment during his time as ‘mayor’ in the Crescent Arts Centre, Belfast

Foursquare is a location-based social networking website for mobile devices, such as smartphones.

Users ‘check-in’ at venues using a mobile website, text messaging or a device-specific application by selecting from a list of venues the application locates nearby.

Location is based on GPS hardware in the mobile device or network location provided by the application.

Each check-in awards the user points and sometimes ‘badges’.