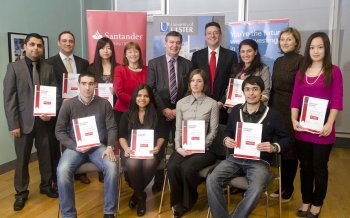 Eleven international students at the University of Ulster have been recognised for their academic prowess, leadership skills and commitment to career progression. The students will each receive up to £5,000 to support their future study and research thanks to the support of Santander, through its Santander Universities Global Division.

Following an agreement signed last year between the University and Santander - one of the world’s largest banks - Ulster is now part of the 998 universities in 17 countries that receive funding from the bank. This paves the way for Santander UK to help the University to secure work placements and exchange programmes for staff and students under the Study and Research abroad awards.

Congratulating the students on their awards, Ulster’s Vice Chancellor, Professor Richard Barnett, said the University was proud to be part of the prestigious group of universities.

“The awards being made at this event represent the first in series of scholarships and other forms of financial support which we are delighted to be issuing on behalf of Santander for the benefit of staff and students at Ulster.”

"This event celebrates the achievements of those international students who chose to come to Ulster for their higher education. Their presence not only enriches their own experience by living and studying away from their home countries, but also enriches the experience of domestic students who have the opportunity to network with peers from around the globe.”

Matt Hutnell, Performance Director Santander Universities UK, said: “Ulster and Santander began their partnership only a few months ago. However, at Santander we knew from the beginning that Ulster was the kind of university we wanted to work with. This institution gives particular importance to internationalisation and the transfer of knowledge between universities to ensure future growth and development. These are two of the most important features of Santander Universities which makes of Ulster, not only a partner of choice but also a university we look forward to continuing our collaboration with for many years to come.”

The Santander Scholars are studying a diverse range of courses from across the University. The successful students were assessed on their leadership skills, their participation in a wide range of extra-curricular activities and articulation of well-developed career goals in addition to their academic performance.

Professor Richard Barnett, University of Ulster Vice Chancellor with Santander representatives and Ulster international students who were recipients of Santander Scholarships. Back row, left to right:

Through its Santander Universities Global Division, Santander has collaborated with universities for more than 15 years on a unique global initiative which distinguishes it from other national and international banks and financial institutions.

This is a network where universities from all over the world can meet and engage in dialogue. ‘Santander Universities’ was introduced in the UK in 2007 and the bank is already collaborating with fifty-five British Universities and Higher Education Institutions, with agreements focused in promoting international exchange, entrepreneurial activities and the mobility of students and researchers within the network.