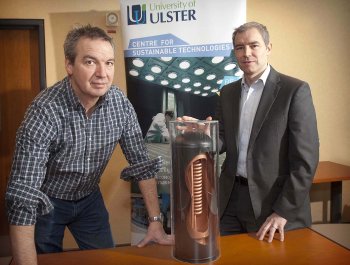 A revolutionary new, low-cost, solar water heating system, pioneered by researchers at the University of Ulster, has made it to the finals of one of Europe’s largest competitions for sustainable design.

PRE-SOL – a lightweight, solar collector – is one of just 25 successful submissions at the Innovation Zone competition for Ecobuild 2012 which takes place at the ExCel in London from Tuesday March 20 to Thursday March 22.

The new solar heating system, which can be easily installed in any family home and will help reduce fuel bills, is the brainchild of Dr Mervyn Smyth, a Reader at the School of the Built Environment who is working on the prototype along with Dominic McLarnon, a Research Fellow.

“It is a great boost to be recognised in this competition which attracts attention from all over the world. Ecobuild offers a highly prestigious platform where the industry can showcase sustainable inventions, technologies and products,” said Dr Smyth.

“Both Dominic and I will be presenting our PRE-SOL demonstration prototype to visitors at Ecobuild and hopefully the experience will open new doors for us in terms of reaching out to influential movers and shakers.”

The patented new system is designed specifically for pre-heating domestic water, is easily installed and has the potential to improve on the cost-effectiveness of traditional forms of solar water heating already in use.

“Expenditure is a big drawback to the current solar water heating technology as, without any government help, it can cost between £3,500 and £4,000 to have a full system installed,” explained Dr Smyth.

“That means those who can afford it are generally middle class, professionals or those with large semi-detached houses, so this excludes a huge number of home owners/owners occupiers.

“The traditional system requires highly skilled installers and involves a collector and tank along with all sorts of pipe works, pumps and electrical devices – that’s where the cost comes from.”

Dr Smyth and Mr McLarnon have been working on PRE-SOL for the last four years, trying to minimise production costs without jeopardisingthe effectiveness of their product.

“We have worked out that over the period of a year – for roughly an initial £4,000 outlay – a traditional solar water heater will give about 60 per cent of hot water in normal solar conditions,” said Dr Smyth.

“The only part of the system which is expensive is an inner coil, which has to be made from either stainless steel or copper. All other parts can be made from metal with a good conductor such as aluminium or tin.

“We have made seven prototypes which were tested both outdoors and under the solar simulator at the University’s Centre for Sustainable Technologies at Jordanstown. We have proven the principle of PRE-SOL, we have proven the concept and we know it works.”

On sunny days the PRE-SOL collects and stores solar energy. During the night it operates in a similar principle to a vacuum flask, ensuring the water store retains its heat for a sustained period of time.

“We have design engineers on board for mass manufacturing and we’ve been speaking to a whole range of people in terms of improving the materials and the look of the finished product,” explained Dr Smyth.

“What we now need is the backing of a manufacturer, a distributer, a supplier or a venture capitalist to help push PRE-SOL into a commercial arena.”