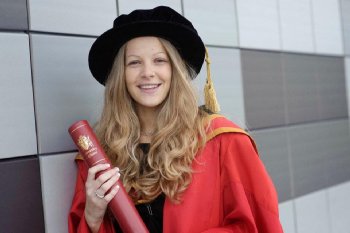 Meaningful interaction between Catholics and Protestants must be proactively encouraged if Northern Ireland is to become a truly shared society, according to University of Ulster research.

Shelley McKeown, who is graduating with a PhD from the School of Psychology at Coleraine today, has been examining the religious segregation that exists among young people in everyday situations throughout Northern Ireland.

The study analysed the amount of intergroup contact, over a period of time, between Protestants and Catholics in three different types of shared space – integrated secondary schools, a further education college and a cross-community initiative.

Using the students’ seating choice as an indication of interaction, the research revealed high levels of religious segregation in both the integrated schools and the college of further education despite the opportunity for Catholic and Protestant young people to spend time with one another throughout the year.

However, an examination of communication between teenagers taking part in a cross-community residential programme showed that despite high levels of religious segregation at the beginning of the programme, this segregation has disappeared by the end of the course.

“This research clearly demonstrates that we need to do more than simply put groups together in order to create a cohesive society. Most importantly it highlights that it is vital to be realistic in terms of what to expect from providing a shared space,” said Dr McKeown.

“For example, results from the integrated schools showed that the majority of classrooms were religiously segregated and that these patterns tended to be consistent over time. Interestingly, the levels of segregation between Year 8 and Year 10 classes were very similar. This is in contrast to the expectation that time spent at an integrated school would lead to more Protestants and Catholics sitting beside one another, an indicator of friendship formation.”

Dr McKeown added: “It was only in the final study, where meaningful group interaction was encouraged through a cross-community initiative, that behaviour and attitudes were found to change, becoming more positive and less segregated over time.

“Of course shared space is vital if relations between Catholic and Protestant communities are to improve in Northern Ireland, some contact is better than no contact at all, but it is important to be realistic when considering the impact that developing shared space can have, especially in societies with a history of conflict.”

Dr McKeown, who is from Ballymena, has recently taken up a post as a lecturer in Psychology at the University of Hertfordshire, following the completion of her doctorate. During her time at the University of Ulster she worked in the Peace and Conflict Research Group and was mentored by the late Professor Ed Cairns and Professor Maurice Stringer.