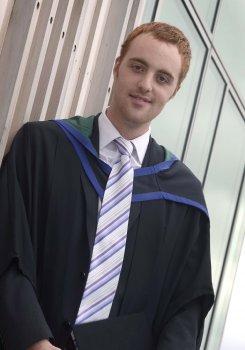 Ballymena student Howard Jamieson certainly has a flair for modern languages. Today he is graduating from the University’s Coleraine campus with a BA Honours in French.

A talented linguist with a love of all things ‘en franÃ§ais’, Howard spent his placement year in Carcassonne working as an English language assistant in a local secondary school.

“Living and working in Carcassonne was a great experience and really improved my confidence in my language skills,” Howard said.

“I loved working with the young people in the school where I was based – they were really enthusiastic and eager to learn.

“I also taught on an English language course for 18 – 22 year olds which was a great way to meet people my own age. I was able to make friends and had plenty of opportunity for socialising.”

Howard immersed himself in the Carcassonne culture and way of life during his eight-month placement – and even appeared on French television.

“I was in an Irish bar with some friends watching the coverage of the Royal wedding when a camera crew from a regional television channel asked me to take part in an interview,” explained Howard.

“Obviously I was surprised and a bit taken aback but I managed to conduct the interview in French, giving my thoughts on the wedding and talking about the upcoming Olympic Games. Some of my friends actually saw the piece on TV later that day.”

Following graduation, Howard will be embarking on a new challenge as he takes up a post as a language assistant in the Galicia area of north-west Spain.

“I enjoyed beginners’ Spanish in the first and second year of my degree course at Coleraine and it’s something I’d really like to develop now.

“I was fortunate to secure the teaching assistant post in Galicia through the British Council, and I’m really looking forward to living and working in the region for the next eight months.

“Eventually I would like to do a PGCE so this experience will be an excellent opportunity to broaden my knowledge of the Spanish language and culture.”