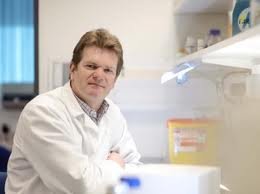 University of Ulster scientists involved in dementia research have discovered that drugs which mimic some of the actions of insulin may encourage the growth of new brain cells.

They hope their work, which has been funded by Alzheimer's Research UK, the UK's leading dementia research charity, might pave the way for the design of new treatments for Alzheimer's disease.

Professor Christian HÃ¶lscher, of the Biomedical Sciences Research Institute at the Coleraine campus, who co-authored the study which made the discovery, said: "Finding ways to protect brain cells and keep them communicating could be an important step forward for fighting Alzheimer's."

A research team led by Dr Emilie Faivre studied the impact of two compounds in mice to see whether they had any effect on their brains. The compounds were designed to imitate the effects of a hormone called glucose-dependent insulinotropic polypeptide (GIP), which helps cells to release insulin.

It is known that people with diabetes, who are unable to produce enough insulin or are unable to use insulin properly, have a higher risk of developing Alzheimer's disease. Previous research has suggested that GIP may also help protect the brain.

The compounds improved communication between brain cells and triggered the growth of new cells in the part of the brain responsible for memory. There was also a small improvement in some learning and memory tasks.

Professor HÃ¶lscher, who is Professor of Neuroscience, said: "More research is needed before these compounds could be tested in people and the next step will be to investigate what causes them to affect the brain in this way. Dementia can only be defeated through research and we hope these findings could eventually open the door to new treatments."

Dr Faivre, who conducted her research while studying for her doctorate at Ulster on an Alzheimer's Research UK PhD scholarship, said: "We were excited to see that the compounds we studied appear to have beneficial effects for the brain, but we now need to find out what effect they might have in Alzheimer's disease.

"We know that diabetes is a risk factor for Alzheimer's, and if we can understand exactly how these compounds work in the brain, we could also uncover new clues about the links between these two diseases. We still desperately need an effective treatment for Alzheimer's, and I hope our results could take us a step closer to that goal."

Dr Simon Ridley, Head of Research at Alzheimer's Research UK, said: "These findings could be an important first step towards the development of new treatments for Alzheimer's, and we now need to see whether drugs like this are able to help people with the disease. There are 16,000 people with dementia in Northern Ireland alone, yet research into the condition is desperately underfunded. It's vital that we invest in research so that we can build on results like these, giving us a better chance of taking new treatments from the lab to the clinic."

The results are published this month (January) in the European Journal of Pharmacology. The scientists want to further investigate the compounds to find out whether they may be useful as a treatment for Alzheimer's disease, the most common cause of dementia.

Caption: Professor Christian HÃ¶lscher in the laboratories at Coleraine