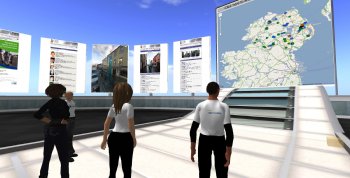 A team of researchers at the University of Ulster’s Magee campus has created a unique online resource that sheds new light on the Northern Ireland ‘Troubles’.

The £260K Arts & Humanities Research Council-funded project - calledVisualising the Conflict– combines an extensive archive of information about memorials, including images, and information about deaths during the Troubles with geographical and internet technologies such as Second Life, Google Earth and Google StreetView to give an enhanced insight into the spatial dimensions of the Northern Ireland conflict.

The project - which is available to the public from today has created a tremendous new resource that helps both academic researchers and the public visualise the spatial aspects of the conflict, according to Professor Gillian Robinson, Professor of Social Research based in INCORE at the University.

"This project has enabled us to do a number of important things. We have been able to produce maps that allow us to better understand the spatial impact of the conflict in Northern Ireland, for example the location of killings. The maps show concentrations of incidents in north and west Belfast, in Derry/Londonderry, in south Armagh and indeed in other Border regions.”

"While other projects have produced some GIS troubles-related maps, our project has generated new mapping and is the first to make a large set of maps publicly available via the CAIN website.”

The research team included colleagues in the School of Computing and Intelligent Systems who led the integration of the newly mapped material into a 3D virtual educational space, which is increasingly used by universities across the world.

"As far as we know, this is the first time that the Second Life environment has been used for teaching in the field of commemoration and memorialisation," said Professor Robinson.

“The project drew on newer geospatial technologies such as Google Maps and Google StreetView and has combined the memorials and deaths location data in such a way that when you go into the data on the CAIN website, you not only see the archived images of people and memorials associated with any particular site but you can also instantly access all the other information held about the incident.

"Through Google StreetView, for example, you can look at the location and see what the memorial site is like today (e.g. http://cain.ulst.ac.uk/victims/gis/googlemaps/index.html).

“The research team compiled information on memorials including accurate map grid references. That meant we could begin to do some new and interesting things such as examine the relationship between the location of deaths and the location of memorials. This has highlighted some differences in the way the various groups have commemorated their dead. ”

The project builds on earlier AHRC-funded work which created the archive on victims, survivors and commemoration within CAIN.

“The main part of the archive contains documents and information gathered from a wide range of sources. We also photographed and catalogued most of the memorials that had been constructed in public spaces to commemorate people who had lost their lives in the conflict.

"Now, with colleagues intheIntelligent Systems Research Centre at Mageewe have been able to take this material and transform it into a collaborative virtual educational space that offers enormous educational opportunities for the future.

“In building the virtual space (in Second Life) we created over 200 3D models of memorials and linked them to location information on a Google Map. It means userscan‘virtually’ visitmemorials and places in Northern Ireland where they might not in the real world feel comfortable visiting or even be physically able todo so. In this way they can experience memorials which would otherwise be inaccessible to them.”

"Sometimes,” Professor Robinson added, "even in classroom situations in Northern Ireland, it can be difficult to talk about these kinds of subjects with student groups. Some may have relatives who were killed during the Troubles, and there may be memorials already erected to them. We are interested in assessing the suitability and usefulness of a virtual learning environment such as Second Life for teaching this sort of sensitive subject.

“The virtual educational space also allows international students to examine in this virtual world some of the themes and issues around commemoration and memorialisation in Northern Ireland. It allows local students to go to places they could visit in no other way.”

Dr Michael Callaghan of the Intelligent Systems Research Centre at Magee said: "We took the Google Maps and StreetView information and integrated them into a collaborative 3D immersive environment - Second Life. What that enabled us to do was to allow groups of researchers or students to work on the project collaboratively.

“You have a virtual presence - your avatar - and that allows you to interact, talk and communicate with other users in the virtual world.

“We created, in effect, a virtual classroom where the students and researchers were able to collaborate, discuss and work on the material together in new ways not limited by their physical location. They can search the maps, call up pictures, information on incidents, and we also created a virtual representation of the memorial.

“That added a powerful new dimension to the information, and will enable people to better visualise the conflict and the location of the memorials across the whole of Northern Ireland. On the information technology side, we took a fairly static resource and made it much more interactive and dynamic through giving it a geographical context, while on the educational side, we also added features to enable teaching, virtual classrooms, group work, seminars and visualisations - all new ways for people to interact with the information in the CAIN archive.”

But the project is not yet complete. As with any historical archive, there are always new things to be added, updates to be made.

Professor Robinson said: "The current database holds information only on memorials that arein public places. In the future it is hoped to extend the collection to include memorials in private spaces, e.g., churches, police stations, military sites, Orange Lodges, business premises, etc. CAIN is always happy to hear from members of the public who have information that can improve or enhance the site.”

View of the virtual education space created to display information on memorials and commemoration in Northern Ireland.

(If you click on an icon on the map, you can go a virtual tour of the memorial/access all the associated information – which will come onto the panels alongside the map and see the ‘real’ streetscape of where it actually is, to help visualise the conflict.)

A view of the ‘Memorial Street’ constructed within the virtual education space to display examples of memorials found in public spaces in Northern Ireland. On the left is the an example of a Republican mural, this one is in Glenalina Road, Ballymurphy, Belfast and on the right is an example of a Loyalist mural, the Cecil McKnight mural in Emerson Street, Londonderry. 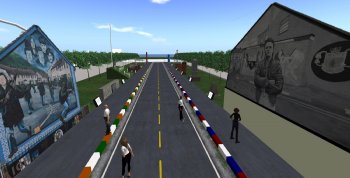