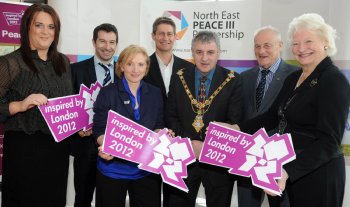 The University of Ulster’s Sports Academy will deliver a European funded project that will challenge sectarian and racist attitudes in six council areas, it has been announced.

The initiative aims to develop a shared future using sport as a medium to improve trust and cultural understanding.

Dame Mary Peters said: “Since winning my medal in 1972 I have been in the privileged position of supporting young people achieve their best in sport.

“There are so many young people purposely involved in sport but there could always be more. Projects such as this embrace everyone, I strongly back the six Councils who have the wisdom to believe in this initiative.”

The Sports for Peace Building project, which has already been awarded the prestigious London 2012 Olympic Inspire Mark, is one of 10 initiatives that make up the multi-million pound North East PEACE III programme.

Kyle Ferguson from the Ulster Sports Academy said: “The Sport for Peace Building project has three main themes – engagement, empowerment and legacy. The framework will be specific to local needs within each Council area within the North East Cluster.

“An underlying theme is to develop a shared future, using sport as a medium to improve trust and cultural understanding, while developing partnerships and creating shared spaces at a local level.

“The objective is to encourage people to become fully engaged in activities not normally associated with their community background, while using sport as a medium to develop understanding of other cultures. This practical involvement in a safe environment will build trust and help to challenge negative perceptions and attitudes about others.”

The project will involve a range of innovative courses and activities designed to engage with local people through sport and build integration, with elements available to primary schools, secondary schools, sports clubs and the general public.

Mayor of Coleraine, Maurice Bradley, said: “In Coleraine we are very proud of our peace building partnership with the neighbouring Councils.

“Our PEACE III vision is to acknowledge the different cultures, traditions and communities that live and exist across the North East area. Sport is a positive and effective vehicle which has proven to facilitate peace building through sharing experiences from different cultures.”

Jack Rankin, Chairman of the Joint Committee of the North East PEACE III Partnership said: “The overall objective of the PEACE III programme is to create a peaceful and stable society. The Sport for Peace Programme targets groups from disadvantaged areas, marginalised groups and ethnic minority groups from the North East.

“The aim is for participants to gain an appreciation of the different cultures which exist across the NE area. They will have the opportunity to join in sports and leisure activities not normally associated with their community background and engage in activities, which raise awareness and respect of other cultures.”

Coleraine Borough Council obtained £4.1 million funding from the EU Programme for Peace and Reconciliation in Northern Ireland for North East PEACE III. This follows on from the successful first phase of the project, which ran between 2007 and 2010.