Ulster Researcher Uncovers Long-Lost Episode Of School Around the Corner 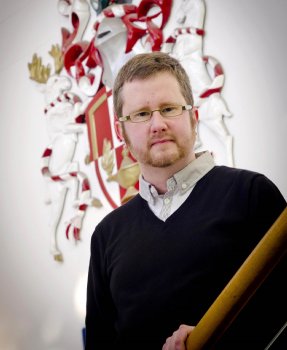 Research into television archives conducted at the University of Ulster’s Centre for Media Research (CMR), has led to the discovery of a vital piece of Ireland’s audio-visual heritage.

An edition from the original 1960s incarnation of ‘School Around The Corner’, one of Ireland’s most enduring television formats, was found by CMR, PhD researcher, Ken Griffin, in the UTV archive in Belfast.

Prior to this discovery, no episodes of the original series, which ran from 1962 to 1966, were known to exist.

Griffin has been researching the archive and library at UTV for the past two years and the recovered episode, ‘School Around the Corner from Cork’, provides a unique insight into the origins of the programme, which has become one of Ireland’s most enduring television formats.

The series originally began on radio in 1954 and the recovered episode reveals how its creator/presenter Paddy Crosbie adapted the format to meet the requirements of a new medium - television. It is also the only surviving footage of Crosbie presenting his own programme.

The episode, which was originally shown in December 1962, was subsequently returned by UTV to the RTÃ‰ Archive where it has undergone restoration. A re-mastered version will be broadcast on RTÃ‰ONE at 5.10pm on Sunday 23rd December 2012.

The original radio version continued until 1973 while a revived version of the television series ran from 1990 to 2005 with RTÃ‰’s Gerry Ryan and UTV’s Frank Mitchell taking Crosbie’s role.

The rediscovered episode is also an important artefact from a technical perspective. Not only was ‘School Around The Corner’ extremely popular, it was also used by RTÃ‰ as a test-bed for new technologies and production methods, including videotape pre-recording and the use of outside broadcasting facilities for non-live programming.

"Unfortunately, television was once seen as an ephemeral medium and programmes were commonly discarded following transmission until the 1980s,” said Ken Griffin. “This means that a significant chunk of our television heritage is missing presumed destroyed.

“My work involves the study of these gaps in our television archives, assessing their historical impact and devising strategies to circumvent them where possible. This type of research can sometimes lead to the recovery or rediscovery of missing material.

“The School Around The Corner is the most dramatic example to date in an Irish context of such research leading to the recovery of a historically significant programme.

“As a researcher, one of the most satisfying aspects of the recovery is its human impact in terms of the delight that it has brought to the children who participated in the programme, who only had memories of their television appearance until now.”

“A programme that was once seen as a disposable piece of trivia has today become an invaluable historical document. As new digital technologies make accessible to us the television of bygone eras, we are slowly gaining an invaluable insight into a world that has changed irrevocably.

“I am delighted that the CMR continues to be at the cutting edge of such research.”

RTÃ‰ archivist Liam Wyle said: “We were delighted to discover that a copy of a 50-year-old programme was in UTV in Belfast. ‘School Around the Corner’ was the most popular programme on Telefis Eireann (RTÃ‰) in the early 1960s.

“In a fitting end to the last few weeks of TV50 a celebration of 50 years of RTÃ‰ Television, a re-mastered version of the entire ‘School Around the Corner from Cork’ will be screened 50 years to the day it was first broadcast.”

PhD researcher, Ken Griffin from the University of Ulster’s Centre for Media Research