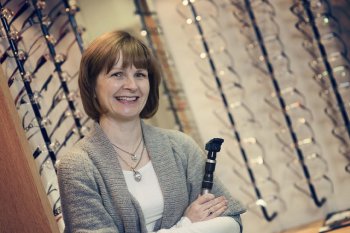 One in four spectacle-wearing Northern Ireland schoolchildren are failing to bring their glasses to school – the place where they need their glasses most, according to a University of Ulster research project funded by the College of Optometrists.

The research team included Dr Lisa O’Donoghue, who lectures in Optometry at the University of Ulster’s Coleraine campus and the research – called the Northern Ireland Childhood Errors of Refraction (NICER) study –involved visiting schools across Northern Ireland to assess the health of children’s eyes.

And the pioneering study –led by Dr Kathryn Saunders –has resulted in Dr O’Donoghue receiving a top UK accolade – the Neil Charman medal of the College of Optometrists –for her work.

“We’ve found some interesting things,” said Lisa, who is also a member of the Vision Science Research Group within the Biomedical Sciences Research Institute at Ulster.

“There’s been a lot of talk in the media about the prevalence of refractive error - especially shortsightedness and how much it is increasing and the reasons for that. Interestingly, in the UK and Ireland there were no robust studies that could help inform that discussion.

“Data on this subject are difficult and time-consuming to collect. So when we began, one of our chief aims was to find out exactly how prevalent shortsightedness was among Northern Ireland schoolchildren.

"But in Northern Ireland we have - compared to other populations throughout the world - and especially when compared with white children in Australia – quite a high prevalence of both long-sightedness and shortsightedness - and that’s quite unusual. So we wanted to explore the reasons why that situation has arisen."

The first phase of the study examined over 1000 children –initially in two age groups, 6- 7, 12-13 year olds. Both primary and post primary school were involved in the research.

“The scale of the problem depends on which age group you are talking about. Myopia is unusual at 6-7: it often develops in the pre- and early teen years - but by the age of 12-13 we were finding a comparatively high prevalence, compared to the Australian group,” said Lisa.

Turning to the public health and policy implications of her work, she said:

“I think there have been quite a few healthcare policy implications emerging from the research that were not clear to us before we started. One of the interesting things that we found was that there are a lot of children at school that do not see very well –simply because they are not wearing their glasses.

"We found that one in four children were not bringing their glasses to school – which is often the environment where they most need to wear them, so they can see the whiteboards, overheads, books etc.

“That was an interesting issue that needs to be addressed: why are so many children not wearing their glasses at school? It wasn’t even that they were simply not wearing them: it was that they did not bring them to school at all.

"We sent children back to the classroom to look for their glasses, but in many cases the glasses were at home, and had not been worn for a considerable length of time. That’s worrying,”

Lisa, who received her medal at a ceremony in Central Hall, Westminster, London, had a message for any parents whose children need to use glasses:

“If you have a child with glasses, make sure they wear them! It’s very helpful to make sure that the school your child attends is actually aware that your child needs and has glasses, so they can also help make sure he or she wears them at school.”