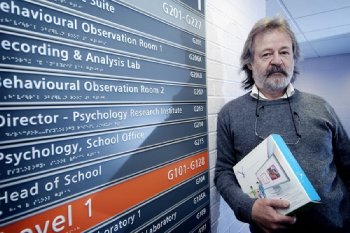 Two academics in the School of Psychology at the University of Ulster’sColerainecampus have been promoted to professorships.

Dr Mickey Keenan becomes a Professor of Behaviour Analysis and Dr Melanie Giles becomes a Professor of Psychology.Professor Keenan has an international reputation for his pioneering researchand teachingin behaviouranalysis.Hehas enjoyed a distinguished academic career at home and abroadwhere he has given keynote addresses in a range of topics inNorway, New Zealand, Portugal, India, USA,Italy,andPoland.

He holds both an undergraduate degree and doctorate in Psychology from the University ofUlster, graduating in 1976 and 1984 respectively.After a year of post-doctoral research attheUniversity of Cologne in Germanyon aEuropean Exchange Fellowship, which was funded by theRoyal Society of London,he joined the University of Ulster staff as a lecturer in 1985 and in2002, he was appointed a senior lecturer.

Professor Keenan is well known for his many years of public advocacy in the media and academia for autistic children and their parents.Since founding the charity Parents’ Education as Autism Therapists (PEAT)in 1997, Professor Keenan has been involved in the fight for science-based practice for childrenand their familiesaffected by autism.

He was the lead researcher for a major EUgrant from Leonardo’s Lifelong LearningProgramme,STAMPPP (Science and the Treatment of Autism: a Multimedia Package for Parents and ProfessionalsSTAMPP), which developed a unique teaching programme forparents and carers ofchildrenwith autism.Thepackage,'Simple Steps'is beingtranslated forparents and professionals in Spain, Norway, Germany, the Netherlands, Sweden, Italy and Iceland.

A Fellow of the British Psychology Society, the Ulster academic was recently elected to the Board of Trustees of the Cambridge Center for Behavioral Studies - an international charitable, non-profit organisation based in Massachussetts, USA, that harnesses the expertise of hundreds of behavioural scientists to solve problems in the home, school, community and the workplace.

His interestin behaviour analysisspans a wide range of topicsoutside of autism andcurrentlyhe isinvestigatingissues inthe study ofcreativity.He has just published a new interactive book ‘Behaviour Analysis: A Primer’ that is available from the iTunes book store.

Following his appointment, Professor Keenan said: "Itisheart warmingto know that my university colleagues have acknowledged theimportantrole that behaviour analysts likemyselfcan play in reaching out to the community."