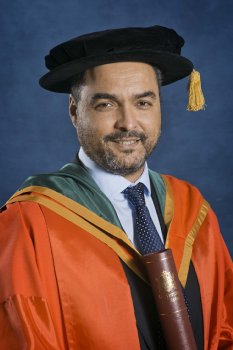 Leading biomedical scientist Dr Mateus Webba da Silva has been awarded a Distinguished Research Fellowship by the University of Ulster.

Dr Webba da Silva is established as an internationally competitive independent researcher in his field.

He has established novel research into the folding structure of DNA molecules employing Nuclear Magnetic Resonance (NMR) spectroscopy at the University.

This technique allows for finding the relative positions of atoms in space. Unravelling how DNA can fold in unique ways is cutting edge and may impact on important aspects of gene expression. His research has implications in understanding mechanisms of disease and health disorders at the molecular level.

Since joining Ulster in 2005, Dr Webba da Silva has been collaborating with international centres of excellence in Japan, USA, and Europe.

Given the importance of this research, the University has invested significantly in capital expenditure to purchase equipment for NMR-focused work. This investment is supported by Dr Webba da Silva’s external grant income and publication of his research findings in publications such as Angewandte Chemie and the Journal of the American Chemical Society.