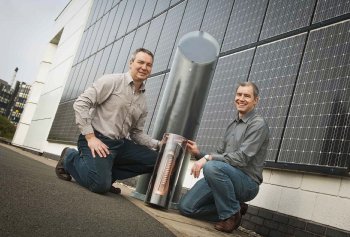 Online voting has now opened in a major competition to find the UK’s most innovative new products – and Ulster’s SolaCatcher is in the running.

The low cost, solar water heating system, pioneered by researchers at the University, is enjoying pride of place in the Make it in Great Britain Challenge at the Science Museum in London.

Visitors to the six-week exhibition are invited to vote on their favourite product and top scorers from each weekly poll will feature in the final week, when the ultimate winner will be chosen, again through the voting process.

SolaCatcher’s technology is innovative in its operation and installation and has the potential to improve upon the cost-effectiveness of more traditional forms of solar heating.

It’s the brainchild of Dr Mervyn Smyth, Reader at Ulster’s School of the Built Environment who is working on a commercial prototype alongside Dominic McLarnon, Research Fellow at Ulster’s Centre for Sustainable Technologies.

On average, existing solar heating systems cost around £4,000 to install and can provide around 60 per cent of a household’s hot water.

It’s estimated that the current SolaCatcher unit can provide about 20 per cent of domestic hot water needs at less than 15 per cent of the cost of conventional systems.

With proposed product improvements, even greater efficiencies are anticipated.

The system is suitable for a range of applications in social housing, domestic and commercial buildings, disaster relief structures, leisure facilities (eg camping and caravan sites) and stand alone functions.

Vote for SolaCatcher at: http://makeitingreatbritain.bis.gov.uk/Vote-now. Votes must be in by Tuesday August 14.