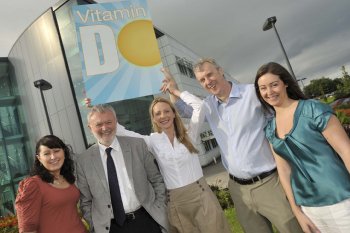 Scientists from both the NorthernIreland Centre for Food & Health (NICHE) and theBiomedical Sciences Research Institute (BMSRI) at the University of Ulster have held a ‘think tank’ at the Coleraine campus to review their Vitamin D research to date and map out priorities for future research projects.

Vitamin D – sometimes known as the sunshine vitamin – is vital for the formation of healthy bones, and may also help prevent diseases such as diabetes, cancers, rheumatoid arthritis and multiple sclerosis. The main source of vitamin D is exposure to ultra-violet radiation in sunlight, which produces vitamin D in the skin.A small amount of vitamin D can also be obtained from the diet.

“Research into vitamin D has been ongoing at both NICHE and BMSRI over the last decade. D Day was an opportunity forresearchers involved molecular (cell) work and those doing clinical research and human intervention studies to identify future collaborative vitamin D projects.

“It was also a way to showcase some of our past research projects and to highlight its relevance and application both at home and abroad.”

The D-Day event was organised by Human Nutrition lecturer, Dr Emeir McSorley. She said NICHE’s research into vitamin D status in different parts of Ireland was just one example of the important kind of research being carried out at the Coleraine campus under the auspices of NICHE and BMSRI.

“Our research has shown that low vitamin D status is a problem in Northern Ireland in otherwise healthy people but also in those with certain conditions such as Systemic Lupus Erythematosus (also known as Lupus), Multiple Sclerosis and prostate cancer.”

“Northern Ireland’s latitude of 55º North means that seasonality is an important determinant of vitamin D status and seasonality allows us to investigate associated health outcomes over a range of vitamin Dstatus.”

Dr Pourshahidi said that a collaborative research project with University College Cork had shown that, even within the island of Ireland, there are significant variations in the vitamin Dstatus, withstatusin the north west of Ireland approximately 15 per cent lower than that in Cork.

“Results from our previous work have been used to influence policymakers in the US where dietary recommendations for vitamin D have been recently updated. The findings were published in the US by the Institute of Medicine http://www.iom.edu/Reports/2010/Dietary-Reference-Intakes-for-Calcium-and-Vitamin-D/Report-Brief.aspx

“There are currently no dietary recommendations for vitamin D for people aged 4-64 years in the UK but these recommendations are now being reviewed. We hope that our research will continue to add to the scientific evidence that will help influence UK policy makers in the near future,” she adds.