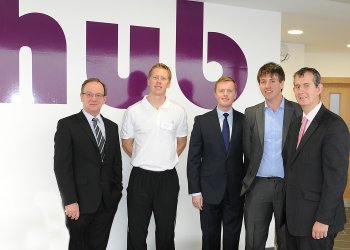 The impact and opportunities the London 2012 Olympic Games offer Northern Ireland will be the focus of a talk given by the University of Ulster’s Dr David Hassan at a conference today.

The 'Moving The Nation: Working Together To Get More People Active' event at Brownlow Community Hub in Craigavon will also be attended by Health Minister Edwin Poots.

The aim of the conference is to bring together a number of key experts and agencies to share information relevant to the promotion of physical activity and a healthier lifestyle among the local population, during this summer of sport.

Health Minister Edwin Poots said: “All Departments, agencies, groups and individuals have a responsibility to ensure that the decisions which are made and the actions taken, work in the best interests of the population of Northern Ireland. We cannot work in isolation.

“Physical activity is a vital part of maintaining and promoting good personal health. Being active is as important as having a nutritious diet when it comes to helping maintain a healthy weight.Participating in physical activity, either for sport or a leisure activity, such as walking or gardening, can also help promote good mental health and wellbeing.”

Dr Hassan from the Ulster Sports Academy will also discuss the defining features of the Games, a critical interpretation of the much-vaunted concept of ‘legacy’ and the political implication of hosting the summer Olympics in the UK for the first time in over sixty years.

His colleague, Dr Conor McClean, will speak about modern trends in public health such as the increase in chronic conditions such as diabetes, heart disease and some cancers. The development of these conditions is, in many cases, linked to lifestyle factors as poor diet and physical inactivity.

In his talk, Dr McClean will outline the benefits of physical activity by highlighting some classical studies, as well as data from his own work.

He said: “Studies from our group have shown that the ingestion of a high-fat breakfast, similar to an Ulster Fry, can impair blood vessel function, often the first step in the development of atherosclerosis. However, this potentially damaging effect is prevented by participation in 60 minutes aerobic exercise, such as running or cycling.”

Conference organiser, Richie Smith of Unify Global Sport, an organisation specialising in community sport festivals, added: “Increased levels of physical activity of the population will not only relieve the financial burden on the health service, but it will also increase and maximise productivity and the performance of Northern Ireland’s workforce.

“In this Olympic year we have a great opportunity to encourage more people to engage in physical exercise which will enhance the local economy and the life of local communities.”