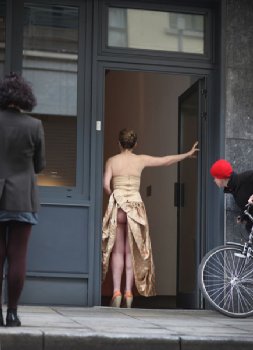 Galleries and venues across Dublin are celebrating the work of acclaimed Irish writer, James Joyce, in an exhibition curated by University of Ulster art expert, Dr Christa-Maria Lerm Hayes.

Entitled ‘Joyce in the City: Dubliners’, the exhibition is made up of several events forming part of the ‘Dublin: One City One Book’ festival, an annual event which encourages the public to read one specific book and celebrate its author.

This year, Joyce’s collection of short stories, Dubliners, has been chosen and during the month of April the city is pulling out all the stops to organise dozens of events to honour its famous son.

Dr Lerm Hayes, a Reader at the University of Ulster’s Art and Design Research Institute, is curator of an exhibition which takes place at various venues: Dublin City Gallery The Hugh Lane, Oonagh Young Gallery, O’Neill’s Bar and O’Connell Bridge.

“James Joyce – famously of increasingly limited eyesight – has been read and interpreted by many visual artists over nearly a century. He has enhanced artists’ ambitions, enabled and disabled their work,” she explained.

“Compared with other works by Joyce, however, Dubliners has yielded few direct and distinct responses. This current exhibition proposes to link this early work with his later creations – through which we now inevitably perceive the short stories – and to include the city of Dublin as an active player.

“Although such an exhibition may go some way towards mediating Joyce’s work, it cannot explain the writer. It may, however, contribute to us resisting the temptation to let him be explained away as a touristic irrelevance.

“Artists taking part in this event have interpreted and ‘extended’ Joyce’s works in appropriate, thought-provoking, knowledgeable and witty ways.”

The exhibition was opened on April 1 at Oonagh Young Gallery with performance art by Amanda Coogan and from May 10 Alejandro Cesarco will be exhibiting there. The Hugh Lane Gallery is showing works by artists Francis Bacon, Joseph Beuys and Dieter Roth.

Belfast artist, Mark Orange, has installed a working radio in the snug of McNeill’s Bar, where visitors can pick up his audio recording of his interpretation of one of the Dubliners’ short stories.

Mark has set the 30-minute work in his native city, tracing the story of two old friends who meet up having lost contact for many years.

For more information on the festival contact Dr Lerm Hayes on m.lermhayes@ulster.ac.uk or visit www.dublinonecityonebook.ie/events-2012#exhibit