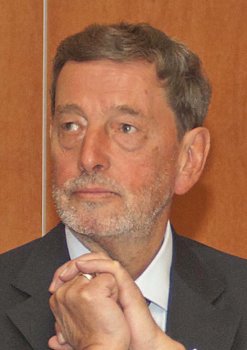 A decision to launch contempt of court proceedings against former NI Secretary Peter Hain has been described by ex-home secretary David Blunkett as "bizarre".

Mr Blunkett was speaking at the annual conference of the Political Studies Association which is being hosted this year by the University of Ulster in Belfast.

The first High Court hearing is due to begin on April 24 after the Attorney General John Larkin was granted leave to begin a legal action over criticism of Mr Justice Paul Girvan in Mr Hain's autobiography.

He said: "The notion that in Northern Ireland of all places, a former Secretary of State should be challenged under an ancient, little used and much discredited law of Scandalising the Court, is bizarre.

"I'm pleased that Geoffrey Robertson QC has agreed to take up Peter's case pro bono and to send a message which was reinforced some years ago by Lord Denning, that political free speech should include comment on reports which are no more free from democratic process than politicians who are constantly reminded that they too, are subject to the rule of law."

Mr Larkin has been granted leave to prosecute Hain and Biteback Publishing over claims a passage in his memoirs "undermines the administration of justice".

Mr Hain, now shadow Welsh secretary, vowed to defend free speech against what his publisher said was an arcane law banning criticism of judges, which had not been used in living memory.

In a wide-ranging speech, Mr Blunkett also offered his views on the recent Bradford West by-election at which Labour was heavily defeated:

“Setting aside the ease with which demagogues can simplify the most complex issues and appeal to basic instincts, the lessons of Bradford West also have a resonance in the reaction of voters over the last four years, in the face of the global financial meltdown

“Bradford tells us that people are looking to those on the side of ordinary people, operating in the democratic arena, to offer that countervailing influence to give hope and a message of optimism, that in a global and ever-changing economic and social environment, government working with people can provide not just basic protection but long term answers to very basic needs.”

“In my view, this involves facing down those who pretend that they have simplistic solutions and that reality will somehow go away if they shout loud enough.

"But it also means providing easy to understand and brave solutions that are both realistic about what power individual governments have in the face of global capital, and how political democracy can engage and encourage participation of men and women in that political process.

"By so doing, to mobilise peacefully and, through that political process, to help in providing a counterweight and therefore countervailing forces to the unaccountable and alienating forces of finance, of the bond markets and of faceless credit rating agencies.”

The conference continues until Thursday.