Crossing Frontiers With ICT In Schools 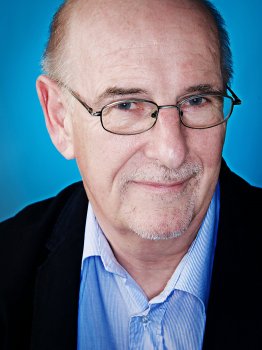 A new report released by researchers at the University of Ulster and the National University of Ireland, Maynooth this week shows compelling evidence of how information communications technology is changing learning across all types of school on both sides of the border.

Entitled ‘Crossing Frontiers in Education’, the report shows how children as young as 10 are using ICT to run cross border mini-companies, how ICT is improving standards of literacy and numeracy and how a north-south model of using ICT to build bridges is being heralded as ‘the best of its kind’ in Europe.

The report, co-authored by Professor Roger Austin (pictured) and Jane Smyth in the University of Ulster’s School of Education with Angela Rickard and Alma Grace in Maynooth is being launched at a planning conference for 200 teachers from special, primary and secondary schools involved in the Dissolving Boundaries programme.

The event is to be opened on Tuesday 27 September by Professor Anne Moran, Ulster's Pro-Vice Chancellor for Educational Partnerships and International Affairs, with Paul Gunning from the north-south Ministerial Council.

The report celebrates the partnership between the two Universities and the Joint Business Council, representing employers’ bodies on both sides of the border whose support for the enterprise work in the Dissolving Boundaries schools has been critical.

Professor Austin said: "The continued support of both Departments of Education and the Joint Business Council for the Dissolving Boundaries programme has made it possible for us to reach over 30,000 pupils since we started this work.

"The evidence in this latest report shows how sustained contact between schools with a mix of ICT links and face to face contact is changing attitudes and improving the quality of learning. We are delighted that there is a growing recognition on the island of Ireland, in England and in the Middle East that this model is robust and can be applied to children in other countries."

Professor Moran said:"In some ways, the Dissolving Boundaries programme is a flagship for the kind of relationship the University of Ulster wants to have with schools. The partnership between the University and the Department of Education and other stakeholders, linked to the commitment of teachers is making a real difference to the lives of many children, including those who experience educational and social disadvantage."

Copies of the report are available on the Dissolving Boundaries website at www.dissolvingboundaries.org, or from https://files.me.com/jivaro1956/zhq6dh