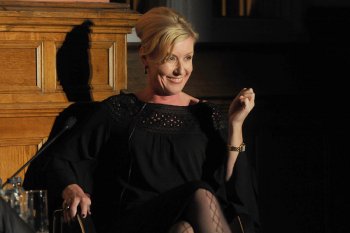 For Riverdance producer Moya Doherty the quest for quality, not money, is the guiding force in a career that symbolises Ireland’s reputation for arts excellence.

“I am only driven by the quality of the work that I’m doing,” she said when she was guest in the first of the new season of “Life Stories” conversations at the Magee campus of the University of Ulster. “The fact that it (Riverdance) has been phenomenally financially successful was not the driving ambition at all.”

Leading figures in cultural activity in the North West, post-primary students and Magee undergraduates in arts, media and business were among the packed audience at the Great Hall for the public interview, which is one of a series with distinguished honorary graduates of the University.

Moya Doherty’s global success in Riverdance, her production skills in other ground-breaking theatrical and television work and her role in national arts policy-making have made her a standard-bearer for Irish cultural innovation and entrepreneurial risk-taking.

Her talents have also reportedly made her one of Ireland’s richest women. She is originally from Pettigo in Co Donegal, where her parents were primary school teachers.

RTE was a key influence on her career, she explained. “It was my university,” she said.

She joined RTE in the hope of becoming an actor but, instead, in the space of four years was secretary, broadcast assistant, journalist and arts presenter.

Later she became programmes producer and among her many topflight credits she was executive producer of the 1994 Eurovision Song Contest.

Along with her husband John McColgan, composer Bill Whelan and others, she steered Riverdance from a 6 minute 40 second Eurovision interval performance to a two-hour theatrical extravaganza.

“That’s where the real creative challenge came, because there were very high expectations, and to disappoint would have been horrendous. There was a very intense period of creative collaboration.”

She added: “Riverdance grew out of public service broadcasting. The drive was simply to do good work, to do something that we could be happy with and proud of. The fact that it spun into this extraordinary industry – and I had to learn the skills of business pretty swiftly and sharply – was just ‘an after’.”

She made it clear that Riverdance will stay on the road touring the world for as long it retains its current quality mark. “I think that we have always felt very strong– Bill and John and myself - that once there is a market for it and we maintain the standard that we are all comfortable with, we will keep it going.”

The University of Ulster awarded Moya Doherty the honorary degree of Doctor of Letters (DLitt) in 2002 in recognition of her promotion of enterprise in the arts.

Dr Doherty, who is a director of Tyrone Productions, a leading independent television companies, also outlined a series of new ventures in which she is involved, including a new dance show  due to open in Dublin 2013 and a co—production drama series with the BBC of crime novels by John Banville, under his pseudonym Benjamin Black.

Picture Caption: Award winning documentary maker and Riverdance producer Moya Doherty who was interviewed by Professor Paul Moore at the first of this year’s series of Life Stories, held in the Great Hall at the Magee Campus of the University of Ulster. The series involves graduates and honorary graduates of the University from the world of arts and culture. Picture Martin McKeown. Inpresspics.com. 12.10.11 Ends