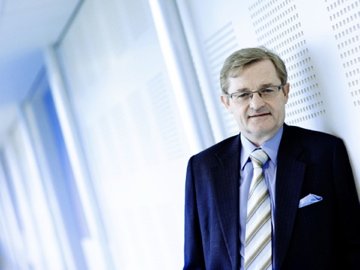 Society has yet to grasp the primary challenge of preventing mental illness and still overwhelmingly relies on treatment, the leader of research activity at the University of Ulster told a major forum at the Magee campus today.

Professor Hugh McKenna, (pictured), Pro-Vice-Chancellor (Research and Innovation) whose expertise in nursing and health sciences has earned him a distinguished international reputation and membership of academies, research and policy bodies in the UK, Ireland, USA, Sweden, Hong Kong and elsewhere, urged governments to devote more resources to prevention.

Opening the University School of Nursing eighth annual mental health conference, he said mental illness has roots in a range of social, economic and cultural factors, and governments should respond with a joined-up multi-Departmental response.

Prevention should not be regarded as solely a policy and action issue for Departments of Health.

Since the influential Bamford Review, there had been some improvement in that respect in Northern Ireland “and Departments are beginning to talk to each other when it comes to prevention” – but more remained to be done, he contended.

Leading UK figures on mental health issues are among the key speakers at the two day conference. It has some 150 participants, comprising policy-makers, government advisers, clinicians, practitioners, academics, nurses, support and advocacy group representatives and people who have experienced mental health illness.

Professor McKenna said: “Through its title ‘The Great Push: Investing in Mental Health’ the goal of this conference is to embrace the theme of positive mental health and well-being. It is about mental health, not about mental illness.

“In terms of prevention, I don’t believe society has done enough to understand and respond.  There are a lot mental health care systems across the world but I believe they are not mental health systems at all, but mostly are mental illness systems.”

Most money is spent on treatment of mental health, he went on, rather than prevention. “Treatment is not enough. Governments have to look at the whole area of promoting good mental health, preventing illness and intervening as early as possible.”

Government departments such as sport and leisure, employment , education, urban planning, each had a role to play in tackling issues that affect the individual’s mental health and in contributing to an illness prevention.

“It is not just about one particular Department in Northern Ireland, or indeed in any other country.  In fact, the Prime Minister of Sweden is on record as saying that all of his ministers are ministers of health, not just one.”

Conference organiser Marie O’Neill, who is a lecturer in mental health nursing, said: “All aspects of mental health including emotional health and well-being of children person centred practice for older people, suicide, alcohol dependence, early interventions and trauma will be on the agenda this week.

“Both statutory and voluntary services actively endorse holistic health and well-being and we wish to give them the platform to share their experiences.  There have been many changes in the work of mental health practitioners and care providers, it is important to consider in line with major mental health reviews the necessary impact our skills and services will have on the future delivery of quality health care.”

Keynote presentations are being given by:

Dr Suzanne Zeedyk, Honorary Senior Lecturer in the School of Psychology, at the University of Dundee, on ‘Nurturing Emotionally Healthy Brains’.

Joan Freeman CEO and Founder of Pieta House The Centre for the Prevention of Self-Harm or Suicide ‘A new approach to Suicide and Self-Harm’.