Maths Week at the University of Ulster, Jordanstown campus 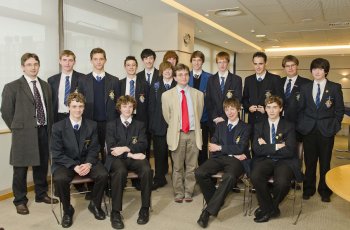 Maths is the most important language in the universe, according to University of Ulster mathematician, Dr Mark McCartney.

The Faculty of Computing and Engineering, at the University of Ulster, hosted a Maths Morning at the Jordanstown campus. Dr McCartney was one of hundreds of academics from all over Ireland to participate in Maths Week Ireland which is organised to promote awareness, appreciation and understanding of Maths.

Dr Mark McCartney, who is based at Ulster’s Jordanstown campus, presented two lectures to Year 12 pupils from across Northern Ireland to try and encourage them to continue to study Maths in Year 13 and 14.

His first  lecture ‘Who Needs Mathematics Now We Have Computers?’ looked at some of the many things that computers cannot do and showed how maths can be used to solve all kinds of problems, even to finding out where traffic jams come from.

“The number has a long history in mathematics going right back to the ancient Babylonians and Egyptians right up to the present day with the Japanese engineer Shigeru Kondo calculating  to 5 million million decimal places in 2010. But in between, mathematicians have discovered elegant formulae and techniques for calculating the number .”

Under the watchful guidance of Dr McCartney, students performed their own calculations to approximate using a number of different techniques, including an unlikely 18th century method based on throwing match sticks around.

Dr Mark McCartney lectures in mathematics at the University of Ulster. His research interests include how maths can be used to model traffic flows along roads, and what happens when atoms collide into one another. His most recent book, which he edited with his colleagues Andrew Whitaker & Raymond Flood, is all about the life of the famous Belfast born scientist Lord Kelvin.