Importance of Links between Academia and Business Community Highlighted 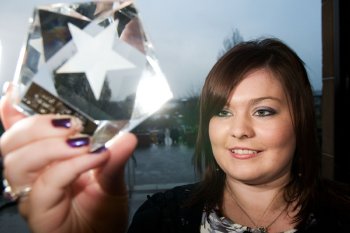 The importance of successful links between the University of Ulster and major international and national companies was highlighted at the School of Computing and Intelligent Systems’ annual awards presentation at the Magee campus.

Awards - sponsored by the some of the major players in the world of computing and electronics - were presented to ten undergraduate and two postgraduate students for their outstanding performance in the 2010-11 academic year.

“The awards are an excellent opportunity for us to showcase the academic achievement of our students, as well as highlighting the willingness of companies to promote excellence in computing and electronics.”

Professor Maguire continued that the strong relationship between the Ulster and the business community was mutually beneficial.“It helps us keep in touch with world of business to ensure that the courses we deliver are relevant and that our graduates are properly equipped to meet the challenges of today’s changing business environment. Employers benefit by having access to a pool of talented and well qualified students for placements and employment opportunities.

Undergraduate prizes were presented to:

The Citi Group Mobile Technologies Prize is a new annual prize this year, and is awarded to the final year student from the BSc Hons Computer Science or BEng Hons Computer Games Development courses with the best mark either in the Applied Mobile Technologies module or in a mobile computing final year project. The first winner of this prize is Kevin O’Hara, year 4 Computer Science, who achieved an overall mark of 77% in the mobile technologies module.

Schrader Electronics present two awards each year for the top students in years 1 and 2 of the BEng Electronics and Computer Systems course. Joseph Kyle won the prize for the top first year student with 75%. Andrew McFarlane won the year 2 prize with 76%, having won the year 1 prize last year.

The winner of the Kainos Prize for the final year BSc Hons Computer Science student whose project uses technology in the most innovative way and can be shown to be capable of working was Mr Declan Traynor, who achieved a first class honours in the BSc Hons Computer Science degree with Diploma in Industrial Studies with commendation. Declan received awards throughout his degree in years 1 and 2, and this prize finishes off four very successful years of study.

The Liberty IT Prize for the best first year student in the BSc Hons Computer Science course was won by Natasha Cavanagh who is enrolled on the software Systems development stream. Natasha achieved an overall year average of 90%. She also won the Lucid Interactive prize for her achievement in year 1.

Lucid Interactive also presented an award for the first top student in the BEng Hons Computer Games Development course, and this was won by Laura McIvor with a year average of 82%.

Both Natasha and Laura, who are former pupils of Thornhill College, took part in Ulster’s Programming in Schools’ Initiative. This gave them a taster of what it would be like to study at Magee and their success is a testimony to the value of the Schools’ Initiative, says Courses’ co-ordinator and senior Lecturer, Dr Heather Sayers.

The new Learning Pool Computer Science Student of the Year award for the top student in final year was won by Mr Han Gong. Han Gong joined final year of the Computer Science degree in September 2010, having completed his first 3 years at Fujian Normal University, and is currently studying at masters level in Bath. His overall average for the year was 80%.

Postgraduate prizes are awarded by 8over8 and Fidessa.

The 8over8 Prize is for the best student on the MSc Computing with Specialisms course, and was won by Rakesh Paul who enrolled on the Computing and Intelligent Systems course in 2010, having completed his earlier undergraduate studies in India.

The Fidessa Prize for the best student on the MSc Computing for Financial Services was won by Philip Fox. 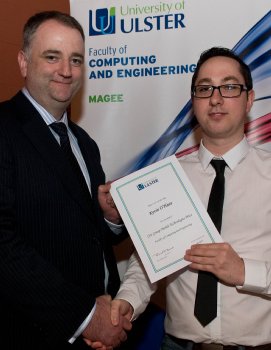