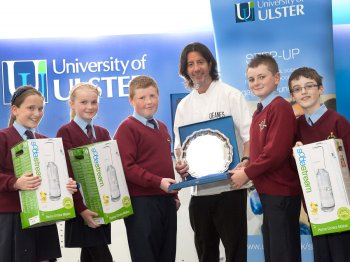 Primary school pupils from across Northern Ireland had a chance to impress celebrated Michelin chef and restaurateur Professor Michael Deane, with their own culinary skills when he chaired the expert panel of judges for the University of Ulster’s Engaging Young Minds Product Development Challenge.

The Challenge was organised by the University’s Department of Access and Educational Partnerships, in collaboration with the Department of Hospitality and Tourism Management.

Last June Professor Deane - who has held a coveted Michelin star for 13 years in a row - was appointed Visiting Professor in the Department of Hospitality and Tourism Management.

The first stage of the challenge involved pupils producing product specifications and recipes for an innovative lunch time snack based around the ‘Eat Well Plate’. To help the pupils develop their ideas, a team of undergraduate BSc Consumer Studies volunteers visited the schools prior to the event to offer advice on product development.

From the original entry of almost two hundred, twenty teams were selected to take part in the ‘cook off’ final in the Product Development Suite at the University’s Coleraine campus.

After lengthy deliberation, the judges still could not separate the top two so joint first place was awarded to Bushvalley PS, Ballymoney, for their ‘Mexican Wave’ dish of spicy chicken tortilla wraps with caramelised banana pudding; and St Eithne’s PS, Derry, with their ‘Nutberry Delight’ cereal biscuits. As part of their prize the pupils from both schools secured a trip for all their classmates to Loughry College, to discover how a wide range of foods are produced on an industrial scale.

Congratulating everyone involved in helping to make the challenge such a success, Dr. Damian O’Kane, Head of Access and Educational Partnerships said: “The media would lead you to believe that young people are only interested in unhealthy fast food. This product development challenge has proved that with encouragement and support, pupils can produce healthy food that they actually enjoy eating.”The ‘Engaging Young Minds’ programme of is supported by the University of Ulster’s Access Agreement Fund and the Department for Employment and Learning.