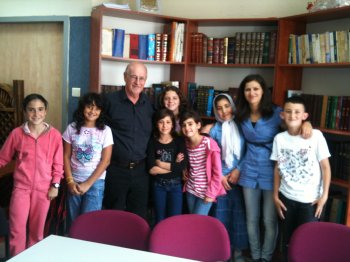 Israel’s Jewish and Arab children are learning to live side by side after schools adopted an internet based link-up programme, similar to one which has proved successful across Ireland, according to a leading academic.

Professor Roger Austin from the University of Ulster has just returned from a visit to Israel where he met with pupils and teachers in traditional Jewish, secular Jewish and Arab schools.

He said a blend of face to face and online learning methods– similar to those used to link schools in both Northern Ireland and the Republic – had been introduced in Israel and were helping to nurture trust between both sides in the divided country.

Professor Austin, co-director of the Dissolving Boundaries schools’ project, delivered a presentation of their current work and future plans to senior civil servants in the Israeli Ministry of Education.

He was able to show some of the lessons which have been learned when linking schools in Northern Ireland and the Republic during the past ten years.

Professor Austin explained the involvement with Israel began following an international conference held in the University of Ulster in 2006, examining the role of Information and Communications Technology (ICT) in bridge building and social cohesion.

During his recent visit to Israel he was able to update the British and Irish Ambassadors on this example of knowledge transfer at a reception in the Ambassador’s home in Tel Aviv.

Professor Austin, said: “Although there are important differences between Northern Ireland and Israel, our depth of experience in the use of internet-based links between schools has been valuable to our Jewish and Arab colleagues.”

The school project in Israel, led by three academics in separate teacher training colleges, Dr Miri Shonfeld, Dr Asmaa Genayem and Dr Elaine Hoter, is building on work they have already carried out with student teachers.