'Concern' Puts Women in the Picture 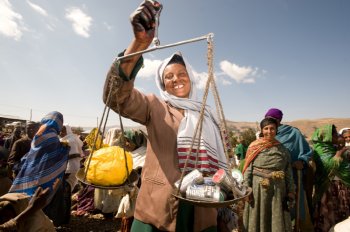 Powerful images of hope, determination and survival from three of the world’s poorest countries take centre stage at a major photographic exhibition opening this evening (Tuesday) at the University of Ulster’s Belfast campus.

The thought-provoking exhibition, organised by Concern Worldwide, focuses on how the charity is supporting the most vulnerable women in Haiti, Ethiopia and Bangladesh, in helping to turn their lives around.

And the University of Ulster’s Director of the International Development Programme, Roisin McEvoy, said they were delighted to work in partnership with Concern to bring the “Women of Concern” exhibition to the Belfast campus.

“In doing so we seek to raise awareness amongst our staff, students and the general public about gender and development issues in some of the world’s poorer countries,” she said.

“It also gives us an opportunity to highlight the good work that Concern and other non-governmental development organisations are engaging in, to address these issues.”

However, just days before she was due to travel, a 7.0 magnitude earthquake struck the Haitian capital Port au Prince, claiming over 300,000 lives.

Brenda’s photos from the harrowing aftermath have been solarized and colour enhanced, to produce a set of ‘art images’ which capture the loss, heartache and devastation caused by this natural disaster.

“I still find it hard to articulate what I witnessed in Haiti following the earthquake,” she said.

“Women coming together to celebrate Mass with their unshakeable faith, pounding out their prayers in song was a moment I felt my weakest. They displayed the true resilience, courage and faith of the Haitian people.”

Photojournalist  and lecturer, Kim Haughton, travelled to South Wollo, Ethiopia and spent time with Concern and its local partner the Women Support Association (WSA) which work together to help tackle violence against women.

Her photos illustrate how this joint effort has helped improve the lives of 2,000 women.

Said Kim: “Capturing emotion and feeling in a photograph is what has always interested me the most. Despite their harrowing experiences, the strength and dignity of the Ethiopian women I met is testimony to the power of the human spirit.”

Marie McCallan, a photojournalist with Press 22 in Limerick, visited Bangladesh where only a third of women can read and write and almost three million children, mainly girls, don’t receive any education at all.   As a result, it’s difficult for women to escape the cycle of poverty and in October 2006 Concern began a five-year education project titled Amader School (Our School) – in 2009 alone 59,307 children benefitted from the project.   Said Marie: “I met dignified, gentle, generous and graceful women with harrowing stories and circumstances during my visit to Bangladesh. It was very encouraging to witness the positive changes Concern and its partners are making to their lives.”   Karen Gallagher, Head of Concern NI, said they were delighted to have been given the opportunity by the University of Ulster to exhibit the images which show the impact their work is having.

“Women can take great pride in the progress that has been made in the past 100 years, but both men and women have a role to play in addressing and ending inequalities in the 21st century,” she said.

“Of the billion people going hungry each night, some 70 per cent are women, who earn just 10 per cent of the world’s income despite doing a majority of work. Concern is working with women in 25 countries around the world to help take concrete steps to ensure their access to food and water, education and a sustainable income.”

The exhibition is open to the public from this evening (Tuesday) until March 18.